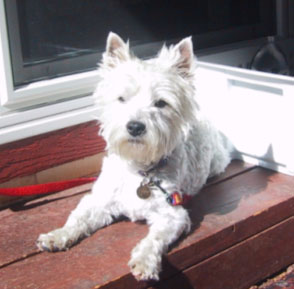 We stood there trying not to stare – the dog was the strangest looking Westie I’d ever seen. She was so thin you could practically see through her, her back was hunched into an inverted “U” and she stumbled and weaved as she ran across the carpet and darted under the coffee table, clearly one of her islands of safety in this hectic house she lived in. Her hair had been shaved nearly to the skin, exposing her emaciated body. Her tail curled tight under her belly as she hunched her way across the floor, dragging her back leg behind her. I was shocked and appalled and wondered if this dog could ever live a normal life.

It was a cold October evening and my daughter and I were there to pick up a ten-month-old puppy who was being surrendered to Dreampower. Apparently, the family had many young children as well as several Huskies, two were adolescents, and they felt that the Westie puppy would be better off in another home than continuing to be trampled underfoot in her current situation. As we stepped into the living room and I sat down to discuss the surrender with the owner, the puppy peeked her head out, looked around cautiously, then jumped out and began to climb all over my daughter and me. For the first time, she looked like a puppy with a typical puppy’s enthusiasm and adoration for all humans! I gave her pets and loves but she ran off to hide behind the sofa as one of the other family dogs came into the room. She reappeared seconds later and growled at the larger dog, acting very terrier-like, not the least intimidated by their vast difference in size.

My heart warmed to the plucky little girl but I wondered about her obvious disabilities. She could not walk straight, often stumbling and bumping into furniture or walls. The owner explained that one of her children had dropped the puppy on her head on the concrete patio outback. The puppy had gone into convulsions and frothed at the mouth for several minutes. I began to understand the dog’s odd behavior as possible neurological or brain damage. But she seemed attentive and smart and was clearly adept at navigating the hazards in this large house fraught with perils for such a tiny, underweight puppy.

I asked how the puppy was fed and was told that the dogs were all “free feeding,” meaning food was left down at all times. Once I had a chance to hold the puppy, it seemed clear that the dog was starving, either not eating the food or being trumped by the other dogs before she could get to it. She had no muscle tone, every single vertebra on her back was sharp and evident, her legs were little sticks and I was afraid I would hurt her merely by holding her. I had to swallow hard to hold back tears – this dog was in terrible shape!

We completed all the surrender paperwork and I thanked the owner for giving up the dog so she could find a good home. I assured her that we would take very good care of the puppy and would do everything we could to nurse her to health and place her where she would be safe and happy. My daughter wrapped the puppy in a blanket and held her in the back seat while we drove home in silence. What had we gotten into?

Although I had owned and loved Westies in the past and am the proud parent of a feisty Cairn Terrier, Peaches, who needed a buddy, I had serious doubts that this puppy would survive the night much less grow up to be a normal, healthy West Highland Terrier. I decided we would foster the puppy until we could, hopefully, build up her strength and treat her physical problems, then determine whether she could eventually be adopted out.

At home later that night, our first priority was to feed the puppy, who we decided to call Libby, short for Liberty. We gave her some canned dog food that she ate without taking a breath, and then promptly threw up. In order to keep her close by so we could observe her, we held her on a leash. She couldn’t settle down, wouldn’t sit or lay, but kept walking around in circles with her head down, tail tucked, bumping into the kitchen table legs and winding the leash around and around the chairs. We’d unwind her and she’d start circling again, back hunched, head down, drooling slightly. The poor creature was in such obvious pain and misery and we didn’t know what to do for her. She was unresponsive and clearly in serious trouble. I knew that we needed to get her to a veterinarian as soon as possible to get her checked out. I sobbed into my pillow that night, already suspecting that this little dog was going to be very dear to me and praying she would be okay.

The next morning, I brought Libby to the vet where I explained her background and asked that she be checked for spinal damage, broken bones, parasites, etc. The wonderful vet was so understanding and obviously as concerned as I was about the poor dog. He did x-rays and blood work and gave her intravenous fluids. He found no obvious broken bones or spinal damage but couldn’t preclude any neurological damage. He thought she might just be so malnourished that her muscles had not developed properly. He prescribed antibiotics, special dog food that would be easy on her stomach, and a course of steroids for the balance and leg problems. He said all we could do was take her home and feed her, care for her, love her and hope for the best. And that’s what we did.

Since that early October day, Libby has come so far. Within days, she was running around the house, tail flying gaily, chasing Peaches, and trying her best to dominate. She quickly claimed the backyard as her own and participates enthusiastically in barking competitions with the neighbors’ dogs. She bumps into stuff a lot, and often stumbles on the steps in the house (which fortunately are only 6 stairs high), but gets right up and forges on. She clearly has the typical terrier toughness and fearlessness, despite her tiny size and delicate condition! In less than a month, she has gained 2 pounds and has developed some strength and coordination. Unfortunately, we discovered that she is blind in her right eye, but she doesn’t let that slow her down. She also continues to drag her right hind leg. Physical issues aside, she is completely loving and affectionate and loves to curl up on my stomach with her head tucked into my shoulder to snooze for a bit between tugs-of-war with Peaches. She is smart, funny, and good-tempered and I can’t imagine a more loving and special dog.

Although Libby continues to improve, we have since discovered the medical reason for her neurological symptoms – she has a condition called a liver shunt. This is likely a congenital condition that causes blood to be rerouted from the intestines directly into the blood system without being filtered through the liver, causing toxins to flood her system. The vet prescribed a daily dose of amoxicillin, Lactulose to help clean the blood of the toxins, and a very low protein diet. So far Libby is tolerating the medications and continues to be a bright, smart, intrepid little terrier with enormous potential to be a healthy, happy dog with surgery to correct her condition. According to the vet, many dogs experience a complete reversal of symptoms following the surgery. Her youth and blithe spirit will aid her recovery from this terrible condition. With surgical intervention, she could someday have full vision and can hope to navigate stairs and hallways without impacting the walls or floors in the process. I just hope that we can give this little dog the long life she so richly deserves, free of debilitating handicaps and free of daily medication that will only moderate her condition, not cure it.