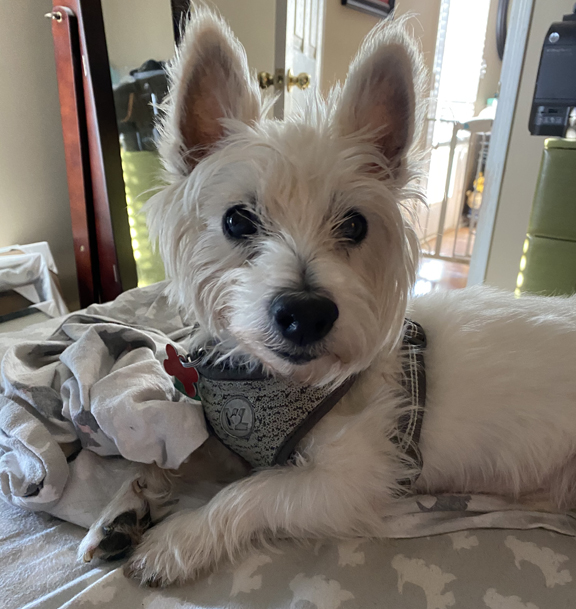 Peyton and his Westie brother Cooper came into the Preston Cares Network Westie Rescue (PCN) in the summer of 2019.  Their previous owner didn’t have time for them, and left them outside in their backyard all-day, every day, while they went to work.  Being typical westies, they got bored and decided it would be fun to dig under the fence and escape.  The brothers were repeatedly picked up by animal control and the fines to pick them up began to increase.  As a result, the owner decided to surrender the dogs instead of paying the fines.

Fortunately, the animal control reached out to PCN to take them in.  They needed to be fixed, have dental extractions done, and Peyton needed treatment for chronic dry eyes.  Of course we said we would love to take the brothers into our rescue, and we had all their medical needs taken care of and both brothers were adopted together in December of 2019.

Unfortunately, after a few months Peyton was losing weight, wasn’t feeling well in general, and just wasn’t happy in his new home. They took him to their local vet who did a Cushing’s disease test which came back negative (among many other tests).  They decided they could not take care of him and they couldn’t afford the mounting medical bills trying to determine what was wrong.  So, with a heavy heart, they decided to return him to PCN in June of 2020.  Once he came back to us, his health continued to degrade and he became lethargic, rapidly lost weight, had very loose stool, and his hair was falling out. Even though Peyton had tested negative for Cushing’s, our vet decided to test him for atypical Cushing’s since he showed all the signs. The test results came back slightly positive.  After starting the treatment protocol, Peyton showed positive results at first, but then he started to lose weight more rapidly and was getting sicker and sicker.  He got to the point where he refused to eat and drink.

We rushed him to the vet for emergency care and our vet did an EPI test which came back positive. Exocrine Pancreatic Insufficiency (EPI) is a syndrome caused by insufficient synthesis and secretion of digestive enzymes in the pancreas. Fortunately, EPI is very treatable. There is special powder (enzymes) you mix into the dog’s food before they eat it which help them digest the food and absorb the nutrients.

Peyton responded very well and his stool is now back to normal and he has gained all his weight back and then some. One interesting development is that his dry eye problem has resolved on its own, so he no longer needs daily drops in his eyes. Now that he is much healthier, we will soon be retesting him for Cushing’s to see if it still comes back positive. If we can rule out Cushing’s he has a much better chance of being adopted.

Thank you WestieMed for the grant to help with Peyton’s vet care, the testing for EPI and Cushing’s, and the prescription enzymes so he can digest his food.  This grant will allow him to be adopted and live a happy life in a new adoptive home.  Peyton says woof (thanks so much as well!).