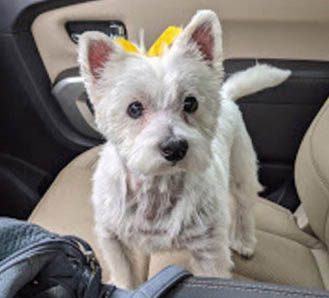 Budgie (aka Angel) had been purchased in New York from a breeder. Her pet parent traveled to Melbourne, FL, when she was approx nine months old, brought her to the local shelter. Budgie is now 9 yrs old. It is unknown how long it was before she was adopted from the shelter or how many families she had been with before living with her last owner before she came to my family.
Her owner had passed away and, along with another terrier breed dog, had been put on a back porch. By whom, it is unknown. A neighbor had been feeding them once a day and ensuring there was water. Another neighbor intervened after learning the two dogs had been abandoned on the porch. After attempts to have local animal control assist, the kind neighbor researched and located Sunshine State Westie Rescue, who immediately sent someone to rescue the dogs. It was thought that her time on the porch was a few months; however, the paperwork I have from the first vet she saw after rescue stated that the owner had passed a year prior. I can only hope the paperwork information is a misprint, and the time being abandoned was, in fact, only a few months.

Budgie was found without any hair, weighing 8 lbs, and as most rescues, suffering from multiple health issues. The foster family (bless their hearts) treated her for an ear infection, UTI, and skin problems. After three months under the foster’s care, Budgie was ready for adoption. We fell in love with her story and applied to Sunshine State Westie Rescue, and after a few weeks of the process, Budgie found her new home consisting of myself, my husband, two 3-year old Westie boys, and our two cats.

We went to get Budgie on Sept 19, 2020 and she’s been part of our family for about 5 1/2 months now. We’ve cleared up any lingering health issues, including having seven teeth extracted due to receding gums and exposed roots. This medical problem was unknown until my vet suggested a deep root cleaning. What a change in her personality after the pain in her mouth was relieved! She is happy, spunky, and full of Westitude! Her remaining issue is her eyesight from progressive cataracts. Budgie has a hard time following her toys that she wants us to toss around; she can’t keep up or follow her younger brothers when playing in the yard, and she is starting to show signs of not recognizing her surroundings. She is the sweetest girl, loving, and does her best to get around. We know that with restored eyesight, her life would be so much more fulfilling for her and her brothers as she’d be able to play more interactively and keep up!

Her surgery is scheduled for April 27th, and she will still need her pre-op bloodwork completed, and we couldn’t be happier for her. We’ve had the retina testing completed, and the prognosis for full eyesight recovery is excellent. She deserves to see her world around her and enjoy her life. We are looking forward to giving this extraordinary gift to her and will share more after surgery.

We thank WestieMed for the caring and support for Westies in need of medical care and all others who helped make this possible.