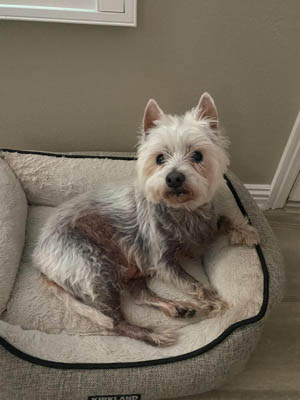 Senior and special need dogs are very close to our hearts, so after losing three very special geriatric forever foster dogs within weeks of each other in April 2020, we became aware of Herbert, a 12-year[1]old Westie with chronic skin, back and leg issues and diminished eyesight. Herbert was found roaming the streets by a good Samaritan and Westie & Scottie Rescue of Houston took him in where he remained in rescue for 1 ½ years. They took fantastic care of Herbert, but with no potential adopters willing to take on Herbert’s chronic issues, the cost that goes with it and Herbert’s advanced age, we felt it was in his best interest to come to WROC as a forever foster.

Amid the pandemic, we flew to Houston to pick up Herbert and flew back to California the same day. Herbert is being treated by an ophthalmologist but unfortunately, due to the lack of care before he reached rescue, Herbert’s eyes are permanently damaged, and he will be on four eye medications, three times a day for the rest of his life. He is also being treated by our dermatologist specialist and though he no longer scratches and is comfortable, he has permanent hair loss due to damaged follicles. Along with having compressed discs in his spine, Herbert is now in need of bilateral TLPO surgery to repair his torn meniscus, torn cruciate ligament and luxating patella in both legs.

Herbert will have surgery on both legs at the same time in June with a board-certified orthopedic specialist to the tune of $9300.00. We knew going in that Herbert’s on-going medical issues would be costly, which was the reason we bought Herbert to WROC as a forever foster so that he will always get the care he needs. We can manage the irreversible damage to his eyes and skin due to previous neglect, but with Westie Med’s help, Herbert will receive surgery that will prolong quality of life, a promise we made to Herbert and all our forever fosters before him.

It has been four months since Herbert had his bilateral TLPO surgery and what a difference it has made with his quality of life!  Herbert no longer limps and moves about very comfortably.  The surgery has also helped ease discomfort with his compressed discs in his spine.  He did gain two pounds which is a lot for a dog his size because he was on strict crate rest but now that he has recently been given the okay to resume his daily walks, we are working on walking off the extra pounds.

Our little big Texan dog at heart is living the dream!

We owe WestieMed a huge thank you for helping Herbert live his very best life.