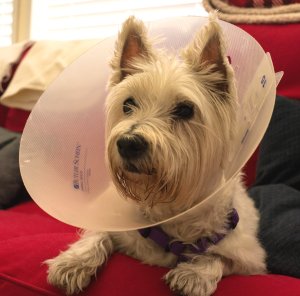 Lily Marline is a very sweet thirteen-year-old Westie whose owner recently passed away and trusted Westie Rescue of Northern California, San Francisco Bay Westie Club to find her a new forever home. She was one of many animals in the household but the only Westie.

Our lovely Bay Area becomes gridlocked during the 4th of July holiday so Rescue needed assistance in picking her up in Stockton, in the valley below Sacramento.

Jo Fleming agreed to fetch this Westie for Rescue and picked her up on July 5th. She settled in at Jo’s place and became fast friends with Duffy, Jo’s five-year-old Scottie.

Within a few days, Rescue was informed that Lily would not be leaving. So Jo set about having vet work done including a much needed dental cleaning, removal of an eyelid cyst and treatment for infections. As a single working terrier Mom, Jo needed assistance to take care of Lily’s needs and WestieMed was asked to provide financial assistance.

Jo and our SF Bay Westie Club Rescue appreciate the generous donation from WestieMed to help us tend to this neglected senior Westie.

To celebrate Lily’s official adoption on July 27th, Jo threw a “Gotcha Party” in Lily’s honor.This party was well attended by seven Westies and two Scotties and provided the perfect opportunity to present Jo with our Adoption Contract which she hastily signed to applause and tail wags from the group. Have you ever seen a happier dog wearing the head gear? Lily Marline loved the Frosty Paws!And here is a photo of Lily Marline’s new sibling, Duffy the Scottie in party attire.

The attached picture was taken on October 25, 2013, of Lily at the SF Bay Westie Club’s Tartan Games. Lily (thirteen years old) was rescued on July 5, 2013, and had kidney and bladder infections, ear infection, growth on her eye and her teeth had not been cleaned. Many thanks to WestieMed who paid for Lily’s vet bill. Her left eye was crusted over, her ears were full of goop, and her teeth were needing a comprehensive cleaning. The kidney and bladder infections lasted for six weeks and she did not like the cone. She had dental surgery and at the same time, they removed two growths, one on her eye and the other on her leg, which she had been licking.

She settled in very nicely into my house with my five-year-old Scottie, Duffy. Lily has been having a hard time lately as we lost Duffy to lymphoma on January 17, 2014. At first, she didn’t want to come near me after she realized Duffy left with me and he didn’t come home. She has had a time of adjustment. She wanders from room to room looking for him. She now lets me hold and love her. She sleeps as close as she can get to me at night. She doesn’t like to be moved after she has found her spot. She grumbles.

She is now eating Science Diet Dental as treats, loves carrots, apples and anything else that is edible. She hates getting her teeth brushed. She acts like a puppy in that she loves to be chased. She has set her own time to be fed each morning and evening. She bounces around whining and if you don’t move fast enough she barks. The walker comes every day to pick her up and she is happy to see him. She tries to help put her harness on. It has been hard on her with Duffy gone but she isn’t crying (face around her eyes were wet) as she did at first. Lily has surprised me in so many ways. She is a wonderful little girl who has her own mind. She takes her dry kibble out of her dish and sits it on the floor, looks at it as if she is counting it, and she will eat a couple otherwise it is left on the floor. One friend suggested she is leaving it for Duffy.
Jo Fleming