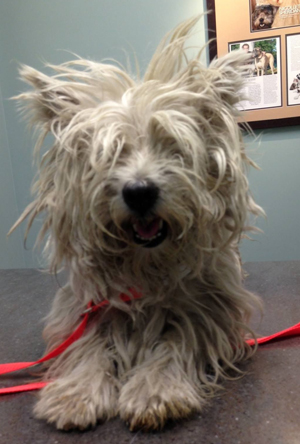 Little MoJo lost his home when his owners brought him to the San Pedro Animal Shelter. They felt that MoJo was “too high maintenance”, cost too much to groom and complained that he was always constipated. This was a very sad day because not only did they dump this very sick little boy, they took home another dog from the shelter. We picked him up within just a few hours of him being dropped off at the shelter.

MoJo was taken to our vet where he had to be sedated in order to shave him down. The mats embedded his skin, but as our vet always does, they left his head alone. Everyone knows not to shave our Westies’ heads! A complete blood panel was performed and aside from an upper respiratory infection, ear and eye infections and obvious dental disease, he was sent home with antibiotics, eye, and ear meds until his dental could be scheduled at a later time.

Over the next few days, we noticed a lump that would come and go at the right side of the base of his tail, but his appetite was healthy and within a few days he started playing with toys and the other dogs. Two weeks after arrival, his dental was scheduled.

On the morning of his appointment, he did not seem to feel well, so in keeping with our appointment, we planned to get him to the vet and change his dental appointment to an observation stay instead. As we headed off to the vet, MoJo became violently ill on the ride there. He was examined, blood work was redone, he was hospitalized and put on fluids. His blood showed his ALT levels were off the charts and he was diagnosed with a Perineal Hernia. Surgery had to be put on hold until we could get his levels back to normal, but in the meantime, his hernia was getting worse. He struggled to potty and cried each time and we were constantly pushing it back in. We ran a third blood test several weeks later and his ALT levels were back to normal and he has been cleared for surgery.

During surgery, his surgeons spent the first hour trying to control blood vessels. It was obvious when they opened him up that he’s had this for a very long time. This problem is rarely seen in castrated males and it’s a bit of a mystery as to when MoJo was neutered but we do know it was recent as his stitches were still intact. Our vet also discovered a mass lump above his rectum adhered to his rectal tissue. It was not attached to his anal glands which is good news! His colon was herniating as was the fat from the prostate. This fat was necrotic so they cut it all out and the decision was made to leave the lump because it has so adhered to the tissue and this being a delicate surgery, to begin with, the chance of fecal incontinence with is always a risk with this type of surgery so a needle biopsy will be done at a later time. While he was under, an enormous about of debris cemented onto his teeth was removed. MoJo is recovering as planned and has come home to heal.

We are so happy that we rescued MoJo and with the generous sponsorship from WestieMed, MoJo had a surgery that he should have had a very long time ago. This is just the beginning of a wonderful new life for this very sweet boy.

Mojo’s bladder is full and it can not be expressed. We may be looking at either a urethral obstruction or tumor or inflammation. We will do an x-ray. We were prepared to move ahead with his treatment, but his little body shut down and sadly Mojo passed away.

KayDeLoach
Westie Rescue of OC & Beyond