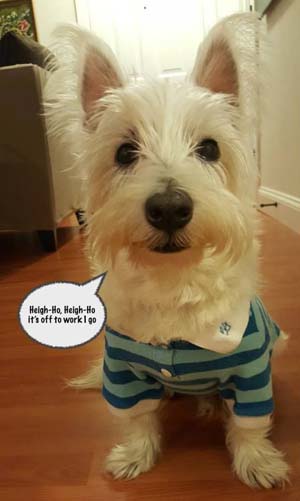 Pickles unique story comes to us from a family with a long history of Westie rescues! Pckles is a dedicated service dog who sticks by his handler’s side to signal for help if needed due to her life-threatening heart condition.

Pickles was diagnosed with Keratoconjunctivitis Sicca, (KCS) also known as dry eye. This condition results when the tear ducts no longer produce tears resulting dry, itchy inflamed eyes (imagine a dry eye with sand in it) the inflammation causes a buildup of mucus that covers his eye, blocks his vision and if left to sit too long would create sores on his eyelids. Up until now, his owner had been able to manage it with meds & constant flushing of the eye, but the inflammation was beginning to starve his eyes of blood-flow and causing progressive blindness.

The request for help became urgent after Pickles walked into a branch that caused a cut near his right eye & in his panic to get away he nearly fell in a storm drain! “Watching him go through this breaks my heart,” said his handler who lacked the funds for the much-needed treatments Pickles needed. She noted that “he’s so full of life and losing his sight is crushing his soul, he’s getting more anxious and fearful of what he can’t see (including the two cat’s he lives with)”.

Pickles needed help and it was clear he could wait no longer so his handler set out to get him the care he needed. This is when they found a very promising treatment option using pickles stem cells. The treatment involves the removal of pickles own stem cells and re-implanting them into his eyes which has been shown to cause the faulty cells to regenerate and become functional again.

Currently, this procedure is being done at two universities (neither of which was near Pickles) and it has had very promising outcomes with eight out of twelve dogs having full remission and the remaining four having significant improvement. Luckily for Pickles, his handler was able to find a local vet willing to perform the procedure but it would be costly.

After trying to raise funds on her own, Pickles handler turned to WestieMed with this unique story.

As of now, he has undergone his first phase in the treatment and is responding well. After just two days, he’s showing signs of improved functioning in one eye.

Thanks to WestieMed for helping to fund his treatment.

It’s expected that Pickles will go on to live a long, happy and healthy life, working each day and positively touching the lives of everyone he meets.

Pickles eyes have had some improvement, (not as much as we had hoped for) but at least now, the medications that had stopped working for him are actually working again which is a godsend.

Thanks again for your assistance in helping him. We GREATLY appreciate it.

Suzy a six-year-old female West Highland White Terrier came into Wag N Train Terrier Rescue on May 4, 2014, from a shelter in Missouri where she had been surrendered by a family member after the death of her owner. The shelter stated that Suzy limped on her left rear leg and was badly in need of a dental with possible extractions.

Upon arrival, Suzy was immediately bathed and the long, matted coat was clipped off. She was matted in places to the skin and had a large amount of feces stuck to her coat underneath her tail. She graciously met the intake coordinator’s Westies and had a good snoop in the yard.

Soon after that, Suzy was taken to Rockbrook Animal Clinic for her dental procedure and x-rays of her hips and patellas to diagnose the cause of her limp. It was discovered that she suffers from degenerative joint disease in both hips and a degenerative disc at the lumbosacral joint. Multiple surgeries would be required or Suzy would need to be on anti-inflammatory medication for the rest of her life. Our wonderful vet, Dr Martin Ramm, suggested an alternate treatment that is relatively new to the veterinary community, stem cell replacement therapy with the goal of giving Suzy a chance at a good quality of life without the use of surgery, drugs, or medications. This procedure has been scheduled for June 19th.

Suzy remains a happy, carefree girl who likes to carry small stuffed toys in her mouth and is happy to meet young and old. We anxiously anticipate her recovery and are optimistic that the procedure will render her able to run, romp, and zoom in the yard without suffering the painful after-effects.

Attached you will find a “before” and “after” photo of Suzy, you can see the transformation that just a good bath and haircut will do! She is a smart and beautiful girl who so deserves to live the rest of her life without pain and suffering.

Suzy is doing great. I fostered Suzy after her stem cell transplant and eventually adopted her. She is such a spunky little gal.

The vet was able to harvest enough stem cells to inject both her hips and her knee and we have stored enough for one additional treatment should it be needed.

The transplant was successful in that we have avoided surgery. It is an amazing procedure with so much promise.

With exercise, laser therapy and chiropractic adjustments following her treatment Suzy has built up her muscles and become an active happy little Westie with the appropriate amount of Westitude. No more limping, skipping or pain.

It is so rewarding to see the transformation she has made and we have WestieMed to thank for that. Should you need a more technical medical report, please let me know.

Again, thank you for all you do. Not only for Suzy but the many pups you have helped. What a blessing. 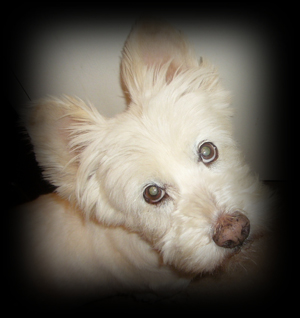 When we received an email from the Westie Yahoo Group that a female senior dog was in a desert shelter, we sent a volunteer right over. Nilla was brought in by a couple that said she was thirteen years old, and they found her wandering the streets. They adopted a puppy and left. More often than not, seniors that end up in shelters are brought there by their owners because they have aged. Upon her veterinarian examination, it was noted that she had severe osteoarthritis in her front shoulders, spine, and hindquarters. Nilla was up for adoption, but those that inquired about her eventually declined. Not because of her age, but because of the cost associated with keeping her comfortable. Though we were managing the pain with medication, it became clear that Nilla would need much more help physically and that becoming a WROC Forever Foster was her best chance of getting everything she needs.

We started to notice that Nilla’s appetite was being affected by the pain associated with the osteoarthritis and it was getting much worse much faster so we brought her to our vet for another consult. Because Nilla is spry and so wants to enjoy all the pleasures that senior hood brings our vet suggested stem cell treatment would be Nilla’s best bet. After doing the research and talking with other owners that have done SCT, and because our vet facility specializes in SCT, we’ve decided this is the way to go.

Nilla is an ideal candidate for stem cell treatment which is a procedure that collects fat cells from the dog’s body. The regenerative cells that are collected do several things: They release chemicals that help decrease inflammation; they send out chemicals to the body to bring healing cells into that area; and they have the potential to regenerate damaged tissue – in other words, nearly reproducing tissue as it was at a younger stage. Under local anesthesia, the cells will be re-injected back into Nilla’s arthritic areas in greater concentration than her own body could’ve accomplished.

The cost of the procedure is very expensive but it is worth extending the quality of Nilla’s life. With the generous sponsorship that Nilla received from a previous adopter and WestieMed, Nilla now has the funds to start treatment!

Rescue is their last chance, so we are going to make it their best chance!

Thank you WestieMed for helping us fulfill our commitment to our seniors!

We don’t recognize this dog! We are approaching three months since Nilla had her Stem Cell Therapy. It appears she reacted to the stem cells rather quickly and we saw rapid improvement in her movement, mobility, agility, and temperament. We have eliminated all medication and today, she struts with confidence and gets up off the floor with ease. Her appetite has returned to normal with a weight gain of two pounds which we couldn’t be more pleased! Should her improved condition plateau, enough stem cell was collected to repeat the treatment; typically done six months apart.

We are impressed by the ease of procedure, with little in the way of invasive surgery (primarily, anesthesia for the collection of fat and re-injection two days apart) which meant that Nilla left the hospital as though nothing took place.

Currently, the process is open for the treatment of osteoarthritis, tendon and ligament injuries, and poorly healing fractures, however studies are presently ongoing for use of this therapy in the treatment of liver failure, feline kidney disease, irritable bowel syndrome, and various autoimmune conditions. Thus far the procedure is most commonly used to arthritis and the results have been impressive. Decreased pain with improved mobility, a win-win combination. It is exciting to think where this therapy could lead us. Because the fat cells are taken from the patient, there is no chance of rejection. What it has to offer presently, and what it could offer to our animal companions in the future could change the way we look at traditional veterinarian medicine.

Thank you WestieMed! Improving the quality of life for our seniors is our mission; one we take to heart.

Karen and Kay
Westie Rescue of OC & Beyond (WROC)

My sweet girl passed away in December from kidney failure.