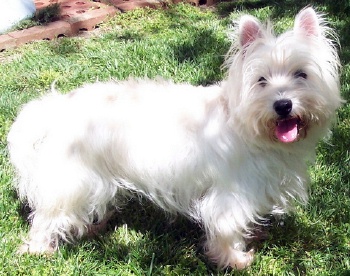 A few weeks ago we had a phone call from our local shelter about a purebred Westie named Sugar, who was turned in by her owner. She was about three and a half years old, according to him, and he gave no reason for no longer wanting her. He did say, however, that he had paid a lot of money for her and, since she had not been spayed, he wanted to sell her papers to whoever adopted her from the shelter. The shelter manager told him that would not be allowed and that, furthermore, all dogs adopted from the shelter are required by law to be spayed or neutered.

We made an appointment at our vets and went to pick her up at the shelter.  Her vaccines were not up to date and no heartworm preventive had been purchased for a couple of years. We were concerned that she would be heartworm-positive. And she was very thin with no flesh over her ribs.

When I arrived at the shelter the manager was walking Sugar outside on a leash. It was very obvious that Sugar was in distress as, in spite of constant squatting, she could not urinate but a few drops at a time. We realized that her medical needs were urgent. When we arrived at the vet clinic, Sugar continued to squat and this time we were able to see that her urine was bloody. Dr. Foster examined her, brought her vaccines up to date and ran a heartworm check which thankfully was negative. She also had intestinal parasites. But, she suspected bladder stones and the x-rays confirmed the presence of three very large stones which had been causing her distress and had put her life in jeopardy. She had surgery the following morning after spending the night at the clinic on IV’s. We knew she was finally in very good hands and was going to get the medical care she needed. We had asked if it would be possible to spay her at the same time as when the stones were removed and Dr. Foster said that if she could, she would but that it depended on how extensive bladder surgery was going to be.

Dr. Foster called that afternoon to say that Sugar was doing well and that she had been able to spay her at the same time. We were able to pick Sugar up the next day. She had removed three bladder stones that were as big as walnuts. She gave us two of the stones and sent one to the lab. The results came back indicating that they were struvite stones and that she had been suffering with them along with a bladder infection for several months. Her bladder was really rough from the stones and it will take a while to heal.

Sugar arrived at her foster home on pain meds and antibiotics with instructions to keep her quiet and only leash walk her. She will have to be on a prescription diet for the rest of her life and have periodic testing to be sure stones aren’t forming again. Her appetite has returned and she is finally beginning to feel a lot better!

Sweet Sugar is recovering very well and she is a wonderful happy little girl who gets along with her foster mom’s dogs. She wants to play but we are still on ‘play hold’ until she is fully healed. We do roll a ball for her to catch, but not too far, and she thinks that’s great for now.

We look forward to placing this cute little girl who deserved so much more than she got, in a home where she will be loved, can cuddle with her new family, and be properly cared for, for the rest of her life. We will be very careful to make sure that happens!

We would like to thank WestieMed for their help in enabling us to bring this little girl’s health back to where it should be. And with your help, we will be able to get the dental work done for Sugar’s gingivitis which she desperately needs!

Her new mom came down from DC to meet her and we all decided it was a perfect match.  Sugar will be living with 2 male Scotties.

Susan, her new mom, has a live-in housekeeper so she will seldom be without human companionship.

I’ve attached a photo of Sugar with her new mom, Susan.

Hi everyone!  I renamed Sugar Marin because all my “kids” are Ms — Madison (whom I lost last year), Monroe, and Morgan.  Marin didn’t know her name was Sugar so she does not seem to mind.  I haven’t found any words she does know, actually, including the all-time favorites:  dinner, cookie, outside, sit, down, come.   We had a challenging week because of this and the fact that she is quite possessive of me and not really great to my two Scottish terriers.  She’s pretty aggressive with them, and they had a pretty sedate, calm life before she arrived.  My oldest Scottie — Monroe — is eight and a half and a distinguished older gentleman.  He’s not happy with our new addition at all and earlier this week, for the first time in his life, he somehow slipped under the fence and showed up on our neighbors’ porch, essentially saying, “I’m moving out; may I come to stay with you?”  Fortunately, they called.

We had a breakthrough last night when I realized that Marin is very much like a puppy, regardless of her three and a half years.  She doesn’t know any rules or have any manners, chews my fingers like a puppy, and runs wild.  So, I have decided to treat her like a puppy who needs to start at the beginning with training and strict rules.

Today we had our first vet appointment; overall she’s in good shape and her gingivitis is not as bad as I thought it would be; they suggested we wait a couple of months before we put her under to get her teeth cleaned and thought that wouldn’t be a problem.  Unfortunately, she also had some white blood cells show up in her urine, so she still has a UTI or bladder infection.  We have another course of antibiotics and “cranberry” pills to make that better; she does not seem in distress, however, and her previous surgeries are all healed nicely.  Some other good news is that the vet thinks there’s a good chance that she does not have to be on the prescription food for her lifetime because the bladder stones were likely just from an untreated infection; we’ll keep her on the special food for a couple of months more and then re-evaluate.

It was a full day for Marin because she also had her first groomer appointment with our groomer (a lovely woman who breeds championship Scotties and used to groom the former President’s dogs — Barney and Ms. Beazley); she was patient and gentle with a nervous little girl who didn’t want her tail or feet touched.  She does not look so wild anymore; she actually looks exactly like my precious Madison, which endears her to me more.   She’s actually a very sweet little girl, and, although she just doesn’t know what to do, I can see that she would very much like to do the right thing and wants to be accepted.

There will be more challenges, but she is now part of our family.  She has hundreds of toys to play with and gleefully dives into the toy box all the time to try them out.  She has her own comfortable, safe bed in my room and has started to play in a healthy way with my youngest Morgan.  She and Monroe were even chasing each other around last night; she runs like the wind.   She’ll be okay.

Thank you all for your help and support.

I adopted Sugar (now named Marin) in May.  She had severe bladder stones when her previous family gave her up, as well as gingivitis.  She was on antibiotics for several months after I picked her up, but her bladder infection is all gone now, and her gingivitis is cleared up due, according to her new vet, a healthy diet.  She has gained weight, which she needed.

She is also settling down into her new home, and she seems very pleased to be a member of our family, which includes two Scottish Terrier brothers.  They play well together and go on long walks with my housekeeper, who also takes loving care of them.

Marin is asleep on the foot of my bed as I type this evening, where she likes to sleep “bottom to bottom” with my youngest, Morgan.  He only tolerates that but it’s very sweet to see.

I am attaching a photo of Marin with her new afghan, especially crocheted just for her by my sister.

Thank you for taking care of our girl before she came to us.

WestieMed and a rescue group in Virginia saved sweet Marin’s life before she came to us, and she has been on a really healthy, happy track ever since.  She has not had a health crisis in the almost two years since then.  She is incredibly energetic, and she loves everybody, including her two brothers, Scottish Terriers Morgan and Monroe.  She sleeps in her bed in my office while I work, and has lots of toys (which she loves) to play with.

Marin’s spirit is definitely indomitable, and we love her very much.
Susan