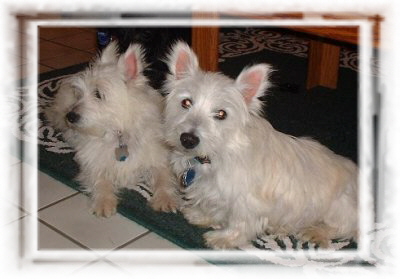 Mikki and Maude were picked up as strays and taken to the St. Tammany Parish Shelter in Abita Springs, Louisiana. Both were heartworm positive and would have been euthanized had they not have been taken in by Dawn Rescue. When found, they had no tags or other identification, they were in very poor condition, and there were signs of having been bred. Mikki and Maude have begun their heartworm treatment, and have experienced some side effects from it. We anticipate they will make a full recovery.

You will be happy to know that both Mikki and Maude have been adopted. Maude came through the heartworm treatment and spaying with flying colors and was adopted by some nice folks in northern Mississippi, who already had a Westie girlie. BTW her new name is Gracie.

Mikki was a whole ‘another story. She did not respond well, and we almost lost her during the treatment (that is the last time we will use the immiticide treatment). When the treatment was complete, she was coughing a lot and x-rays showed an enlarged heart. After much medication and a follow-up ultrasound, she was found to have had a build-up of heartworm detritus in her lungs. She will have chronic emphysema for the rest of her life. Fortunately, she was not an active little girl, so it will not change her lifestyle. One of our neighbors fell in love with her and adopted her about a month ago. We were really happy since we can keep an eye on her as well. Her new name is Gidget. Unfortunately, I don’t have an email for them but can get you one if you wish.

We wish to thank Westie med for coming through for us and the girlies. Both the girlies were expensive to treat, but I’m sure their new families would say it was worth it.