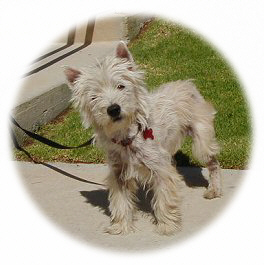 It was perfect timing when Cathy Rubin of Rover Rescue stepped into the Carson Shelter. Poor Maxie was turned in by her owners for unknown reasons. She had a severe skin condition and was likely to be euthanized. It was difficult to tell that she was even a Westie with so much hair missing! She had such a loving personality that Cathy did not hesitate to rescue her. At the vet’s mange could not be ruled out. She was given the proper treatment for the possibility of mange while attempts were made to contact Westie rescue. Westie rescue was well versed in the skin problems of westies and was more than willing to take over her care. So, little Maxie is now under the wonderful care of Westie rescue where her condition will be cared for and a wonderful new home will be found.

I wanted to thank you again for your financial help with Maxie’s bill. As you know, rescue can be very expensive. With the reimbursement for her medical expenses, I can now save another dog in need!!

Missy is doing GREAT. We love her and so do the neighbors. My next-door neighbor lost their dog just about the same time our family lost our Abby. Since they have decided to add on to their house, they are going to wait until it is safe to get another family member. In the meantime, they have a lot of fun with Missy. I don’t know if you remember, but when I got Missy (Maxie) she had a skin problem and some of her hair was gone. Well, I’m happy to report that not only is she back to her normal weight, but she will have her second cut next week. The doctor said she is in perfect health and happy as could be. I don’t know how to do pictures through email but I will try. I would love to show you how happy she is and happy we are to have her.