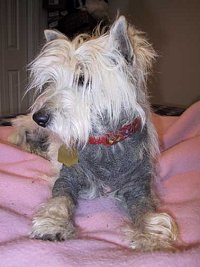 Shannon’s story is an excellent example of what can happen when everyone puts the welfare of a dog before all other issues. This is a story of a number of volunteers and groups working together to contribute to the rescue and treatment of a truly wonderful Westie.

The first part of her story is told by Dianne Luistro of Northeast Westie Rescue. Dianne received the referral call about Shannon and coordinated her surrender and placement in an emergency foster home.

Part one: Dianne Coordinates the Rescue.

Shannon is a very sweet, four-year-old Westie girl with a gentle soul. Her former owners bought her as a puppy from a pet shop. She was well until October 2001 when she began scratching and losing hair. For more than a year, the family took her to the vet and tried to keep up the rigorous schedule of bathing, giving antibiotics, cleaning her ears, and taking her for walks. But, as they told us, other family demands caused Shannon’s care to come in last, and they felt she deserved better than that.

They contacted the MSPCA in Methuen, Massachusetts. The MSPCA staff could not guarantee she would be adopted and/or cured in her current condition. Nor, could they guarantee she would not be euthanized if a home wasn’t found. The MSPCA did give the family a phone number for Northeast Westie Rescue. It took another six weeks to gather the courage to call us. They were not sure what our reaction would be to her condition.

Of course, we were ready to take her in with open arms. But, we had a house full of puppies and needed an alternate foster home. We called Penny & Ed Cherubino, a Boston couple, who work with Westie Rescue of Missouri. They accepted the surrender and provided emergency fostered for Shannon on behalf of North East Westie Rescue.

By the time I picked her up on June 6, 2002, Shannon had lost two-thirds of her hair. The only parts of her that were not bare were the top of her head, her rump, and tail. The exposed skin felt like an elephant’s hide and was black and crusty. Because she had fungal infections of the skin and ears, she smelled awful. She was a very sad, uncomfortable girl.

Fortunately, I had seen cases as severe as Shannon’s cured by Westie Rescue of Missouri volunteers. I also live within walking distance of the Back Bay Veterinary Clinic where Veterinarians with very big hearts were ready and willing to see an emergency rescue pup the moment she arrived in Boston. It also helped that Shannon’s family had supplied us with copies of her veterinary records.

The Back Bay Vets repeated the skin scrapings to be sure it was not a contagious disease that would transmit to our Westie, Maggie Mae, or the dozens of new doggie friends Shannon would make in our neighborhood. They diagnosed Malassezia Dermatitis, and we agreed upon a routine of care.

We decided to hold off on the potent, anti-fungal drugs to see if, with strict adherence to the routine, we could make some real progress without them.

Just to be sure of the treatment, I sent an email to the real experts–other rescuers! Members of the Westie Express Transport Group supplied ideas and successful programs for dealing with a skin problem of this magnitude. Within a day I had lots of solid information and a list of folks to contact for specific advice as I needed it.

I consider Angie Gittles of Capital Paws and WestieMed as my mentor on this rescue. The program the Vets and I agreed upon was one she has used with great success.

My one addition to the program was to put a size two toddler T-shirt on Shannon to make her more presentable to the outside world. It hid most of her bare skin. When we walked her, she got lots of pats and cooing as she won hearts in the Back Bay. The shirt also minimized the damage she was doing to her skin when she scratched. The downside of using a shirt is that it could hold in moisture which is not good for a fungal infection, so we used this with great care.

Once we all agreed to a few ground rules, Shannon became one of the most cooperative patients any rescuer could ask for.

Her first bath was a disaster. Shannon screamed like a banshee and struggled like we were trying to murder her. We quickly discovered that while she was terrified of being put into water, she didn’t mind if we poured water over her. We finished that bath with her standing on the kitchen counter for her fifteen-minute massage and rinsed her with buckets of water poured gently over her from behind.

Long walks in the city called for another agreement. Shannon had lost four pounds in the past 8 months. A lack of exercise has left her with very little muscle mass – she was not a strong pup. We were used to taking long walks with Maggie Mae and her pals. By day three, Shannon was sore and limping. So we agreed that she would walk a little and be carried a little. This proved to be easier than expected.

We have a group of doggie families who meet at a local cafe on a weekend morning to have breakfast together and then head out on a nice long walk with many puppy play breaks along the way. Miss Shannon came to love these outings. She would move from lap to lap at the cafe. Once on the road, we seldom carried her as one friend after another scooped her up and gave her a little rest and a big cuddle.

She settled right in to our home and seemed to improve every day. Soon we felt she was well enough to move on to her long-term foster home. Our continuing contribution to Shannon’s rescue will be to raise money for WestieMed to refill their coffers, so they are ready to help the next dog in need. Members of the Internet Group “The Great Westie Gathering” have already donated money for Shannon’s care and more donations are on the way. We are also keeping our eyes and ears open to find the perfect home for this special girl.

Part Three: Back to Dianne for long term foster care.

By the time my husband Frank and I took over her foster care, Shannon was free of all her scabs and smelled lovely for two to three days at a time. We could see the first signs of peach fuzz poking through. Shannon was still showing black skin, but she was gaining weight and eating well.

At our house, she was in the country. Shannon loved running through the doggy door out into the back yard. She mastered that doggy door the first day. Smart girl!!!!! She followed my two Westies: Rooney an eleven-year-old rescue and Annie an eight-year-old brat. (You know the type!!!)

A very important part of her treatment is a Malaseb shampoo bath every three days. Shannon is an angel when she has to stand in the sink for fifteen minutes while it gets absorbed.

She was on 25 mg of Benadryl to control the itching and inflammation. We were told to slowly wean her off it. By July 11, 2002, she was completely off Benadryl, had stopped all scratching, and was much more alert and active. We also began giving her one teaspoon of flaxseed oil. (a tip was given to us by North East Westie Rescue’s Jennifer Caffrey)

Angie of WestieMed also gave us some fabulous suggestions. One of the most effective was changing her diet to Science Diet Z/D — a low-allergen, synthetic-based protein food.

Shannon’s progress is amazing. Her skin and fur become softer every day. By July 16, 2002 she had put on two pounds and regained all of her muscle mass. She has hair growing on every part of her body except her eyes and nose!!!!!!!

She is not up for adoption yet. We want her fur to grow in a little more and want to continue to monitor her progress. Any potential owner must have the time to provide ongoing care. Shannon will need a weekly maintenance shampoo. Her ears need to be cleaned often, and she must get the proper food. But, this little girl is well on her way to becoming a little princess!!!!!

WestieMed has generously paid for her vet visits, supplies, shots and medication. They will also supply her with lots of Malaseb shampoo to pass on to her new owners.

Thank you WestieMed for approving the finances to enable North East Westie Rescue to carry through with Shannon’s Cinderella story.

Shannon was adopted on August 11, 2002, by a wonderful family who has all the time in the world to devote to Shannon’s continuing care. Shannon also has a big brother dog named ” Spencer.” They both go to the beach on the weekends with their parents. Thank-you Westiemed and especially Angie who gave us the directions and formula to get Shannon well.

My husband & I adopted Shannon (who we now call Maggie) in August from Dianne Luistro. She has brought so much happiness into our home & has flourished. At her last vet appointment she weighed 18 lbs., loves to eat, play & cuddle. She is still having her weekly baths & this week she went for her first grooming. She now looks like a show dog! The groomer said her fur was very full & healthy. She has won our hearts & has become best friends with Spenser (our Chessie). She gives him a run around the yard & he still hasn’t caught her! Just want to say thank you to all of you at Westie rescue for all the wonderful work you do.

Maggie is doing just great – she’s gotten fat and sassy! She is very comfortable in our home & has become quite affectionate. It seems as if she has always been here. I still have two unopened bottles of Malasab shampoo & if there is someone that needs it I would be happy to send them. The groomer uses her own shampoo & Maggie’s fur is beautiful. (when I can keep her clean, she loves to roll around outside!) I haven’t taken any new pictures, but when I do I’ll send some.