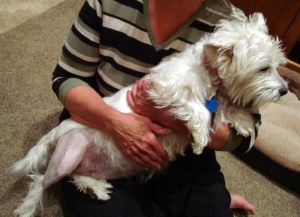 McKayla was surrendered to Oklahoma Westie Rescue (OWR) in October when her human Mother passed away.  No one in the family wanted McKayla so she was given to a family friend.  The family friend was not in a position to keep McKayla so she contacted us to come and pick her up.

When OWR picked up McKayla we noticed immediately that she had a bad limp which proved to be a torn Anterior Cruciate Ligament (ACL) of her right rear knee requiring surgical repair.  She was also infested with fleas.  We got rid of the fleas quickly but couldn’t get her leg fixed because she had developed pyoderma as a result of the flea infestation.  We had to wait almost thirty days to get the pyoderma cleared up before we could have her knee repaired.

During this time one of our adoptive families offered to foster McKayla for us.  McKayla was so scared that she hid under their bed for two days straight.  Finally, on the 3rd day, she came out and began playing with the family’s two Westies.  It wasn’t long before the family decided that McKayla needed to be a permanent fixture in their home.  Since the family had adopted from us previously they were already pre-approved so we told them that once we had fixed her leg that we would adopt her to them.

The orthopedic surgeon was out for some time on vacation so it took us a while but eventually, her repair surgery was performed.  We have another adoptive family that offered to foster her after her surgery to help her through the recovery period (she couldn’t go back to the family that wants to adopt her because their home has many levels and lots of stairs, the surgeon said no stairs for at least three weeks).  On Dec. 15th she gets to go back to her adoptive family and they are waiting anxiously to have their little girl back.

McKayla is nine years old and we are thrilled that someone wants her as often the older dogs have a hard time finding forever homes.  She is one lucky girl!

McKayla and Maddie are both doing well.  McKayla’s leg is fine.