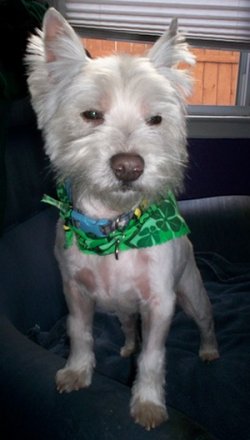 In the third week in November 2010, a co-worker had informed me that she knew of a 68-year-old woman who had an aggressive form of breast cancer and she could no longer take care of her dog, Finnegan aka Finn. Finn’s owner refused to have her double mastectomy and undergo chemo treatments for her breast cancer until she found someone to take care of her dog and give him a home during her treatment.  Since I had cancer and am in remission, I decided to try and pay it forward by taking care of Finn.

Finn was described to me as being a quiet dog that loved being outside, he loved human food and he was not housebroken. I picked up Finn after my second job which ended late in the evening. Finn was very scared but he was great in the car ride to my house. I set up Finn’s pen in my dining room with his favorite baby blankets that were given to me when I picked him up and we settled on the first night.

Over the next few days, Finn assessed his new surroundings and his new housemate, my cat Buster.  He enjoyed peeing all over my home including on me at times. I was clear that Finn was a dog’s dog; he loved having free roam of the fenced-in yard, dug holes in the flower garden, played in the puddles of mud after the rain and he was definitely not the pretty white dog you see on the Cesar’s dog food commercials. Finn rarely barked but I started to notice that whenever I would call for Finn to come in from the yard I would get no response and would have to physically pick him up to bring him into the house.

I scheduled an appointment for Finn to be groomed because his hair was matted and dirty; he also smelled foul. The groomer worked her wonders on Finn, he looked so cute with his new hair cut and his trimmed nails. The groomer was an abundance of information because I had never had a Westie before and did not know that they had allergies or that they had special needs.  I was also informed that I should take Finn to the veterinarian immediately because his ears were closed due to an infection. Now I understood why Finn did not bark or respond to being called.

I whisked Finn off to the veterinarian where I was told again that Finn had an infection that affected his ears and was causing the blackness on his belly. The veterinarian showed me how to clean Finn’s ears, prescribed antibiotic ointment and Ketoconazole. Finn’s ear treatments took place twice a day for two weeks but there was no guarantee that he would regain his hearing.

Even before the first week of ear treatments were over it was like I was taking care of a totally different dog. At first, Finn started to cock his head to one side when he thought he had heard a loud sound but still no bark.  The blackness on his belly simultaneously started to slightly fade. Then one day when Finn was walking on the tile floor the sound of his own nails clicking against the tile made him jump, I knew that the medicine for his ears was working. By the end of the second week of ear treatments, Finn would come when he was called, sat when you asked him to and would bark at the train passing my back yard because he could now hear it.  It was like watching a baby discover the world.

On February 9, 2011, I took Finn to the vet because the black yeast was growing again on his belly. The veterinarian prescribed a combination of Ketoconazole and Clavamox pills to be given simultaneously, along with washing Finn twice a week. A few days after starting this pill regiment Finn started vomiting, I contacted the veterinarian and was curtly told that I must not be giving Finn enough food with his pills. The next day, on his second day of vomiting, I packed Finn’s weak body in the car and went to the vet’s office. They ran all sorts of tests and determined that Finn had an allergic reaction to the Clavamox, resulting in his kidneys shutting down and he had acute Pancreatitis. Finn spent the next four days in the hospital.

Finn came home with new antibiotics but the very next day I had him back at the veterinarian’s office because he still wasn’t drinking or eating.  Finn was given IV fluids, I was told he was dehydrated. I was also told that Finn was hand-fed turkey and ham at the vets. I picked him up that night.  Finn was now removed from all drugs except for an appetite stimulant.  Two days passed, Finn began banging his nose on his bowl and whining, not eating in spite of the prescribed appetite stimulant.  I looked in his mouth and discovered that the tip of his tongue was discolored and mangled. He was unable to eat or drink anything.  The vet said Finn had a piece of his tongue missing and that that was a result of the Pancreatitis and gave me pain killers for Finn.

Before anything else happened to Finn I realized I had to find out more about his present condition. I researched Westies, the yeast infections and the medications prescribed by the vet.  I learned that these allergies and yeast formations were preventable with a little work and the correct diet.  The vet didn’t know or didn’t share this information with me. I discovered the two medications given to Finn that started this particular episode should not have been given at the same time.  I was beside myself and furious that this drug cocktail practically killed this lovable little dog. During my quest to be better informed about Finnegan I found your site WestieMed.

February was a long month and I thought that Finn was not going to make it but Finn has recuperated. This is no longer a life and death situation for Finn. He now is back to his playful self and is on a modified diet due to his Pancreatitis. Finn has learned to use his shorter tongue and is eating without problems.

Unfortunately, due to the effects of the treatment for breast cancer the lady I rescued Finn from had to move into a nursing home and Finn can no longer return to her. I have been fostering Finn and will keep him indefinitely.

I have reviewed WestieMed’s website extensively and I have implemented some of the diet and skin regime from the links WestieMed provided. Your website has been a plethora of information, providing me with the tools to make sure that Finn remains healthy and most importantly happy.
Cathy

To let you know Finn is doing excellent.

He is enjoying his summer sunning himself on my deck when he is not chasing the trains that pass my fenced in backyard. It seems that summer is Finn’s favorite season and he refuses to come in until approximately 9 pm every night.

Finn’s skin condition is doing well.  Again, thanks to the information on WestieMed, and he has had no need to go to the vet for anything other than his vaccines. Catherine Fazio

Finn is doing great, he has only needed to go to the vet for his annual visits. Finn is an obedient, smart, fun and loving dog. He still loves chasing the trains when they enter his domain in the back yard.

The black yeast has stopped growing due to weekly baths and a good diet. I lather Finn up with Castile Soap – Peppermint, which helps any calm skin irritation and removes the dirt from all the digging that Finn does in the backyard. Then I give him a quick rinse along and I wash him with Malaseb Shampoo. I use a soft natural boar’s hair scrub brush to rub the soap on Finn, he enjoys the massage and this also aids in keeping the yeast away. Finn eats only Grain-free and Beef free food.

Finn has playdates and sleepovers with my friend’s dog Rocco.  Finn has also taken on the role of “big brother” to one of the three feral kitten’s we rescued this year, their names are Mike, Ike, and Miss Hissy. Finn has adopted Mike and treats Mike as if he were a dog. Mike follows Finn everywhere, they share toys and play together all the time. Finn has been trying to play with Ike and Miss Hissy the same way he does with Mike but they are afraid of Finn still. I am sure that Finn will win them over in no time.

Once again thank you, if it weren’t for the information and assistance I received from WestieMed I don’t think Finn or I would have survived. I will send you a picture of Finn this weekend.
Cathy