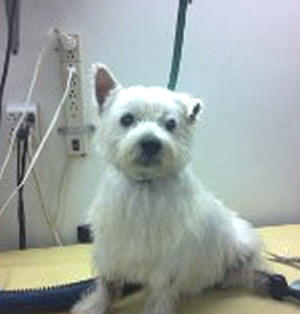 Dunkin was pulled from Garrard County Animal Shelter in Lancaster, Kentucky on 3/29/2012. The ACO was called by concerned neighbors in regards to two dogs left inside a small kennel at an abandoned home. The dogs had been there for some time with no one caring for them…no food, no water, and no shelter.

Dunkin and his canine friend Harley, a labradoodle, were taken to the shelter by the ACO. I pulled them both from the shelter due to Dunkin’s “skin condition” and the threat of him being euthanized due to his poor skin condition. Harley was vetted and adopted immediately.

Dunkin was also vetted immediately due to his skin condition and was diagnosed with hypothyroidism and started on medication. He was also groomed due to extensive matting and yeast overgrowth on his skin under the mats. He was then neutered and all appeared well with an adoptive mom eagerly awaiting him.

On day two after his neuter, he started coughing and wheezing with extreme difficulty breathing. He was also urinating on himself due to the shortness of breath being so severe when he would exert himself. He was rushed back to the vet the day he started coughing and being in such distress. He was diagnosed with blastomycosis. Medication to treat this disease that is common in the Ohio Valley Region was very expensive.

After all, Dunkin had been through and his struggle to simply breathe, it seemed not right to at least pursue other options for funding to get the life-saving meds he needed. Thanks, WestieMed for giving Dunkin the chance to survive…he sends a big “WOOF, WOOF” thank you. I will keep you posted on his progress and send photos as he recovers.

Dunkin was discharged from the vet’s office yesterday and was given a good prognosis.

He will remain on the meds for a total of 180 days. He will be getting a repeat chest x-ray in two weeks and another urinalysis to determine if the meds are clearing things up.

He has had no coughing since at home and has been very active with toys and in the play yard.

I will keep you posted on his progress.

Dunkin is doing better than expected.  He loves playing in his swimming pool.  He hasn’t been coughing or had shortness of breath at all.  I do believe he is on the mend.  I will keep you posted.

This is the big Dunkin boy now. He is slightly overweight…(but everything at my house is lol). He was never placed up for adoption due to his medical condition. He still takes five different meds due to the damage the blast did to his lungs. He is a fat and sassy big boy. He occasionally starts wheezing so bad I have to give him neb treatments for a couple of days. He is very active, loves to swim with his life jacket on, and often lays in the doggie beds with other injured rescues I take in. It is almost like he is saying “It’s ok…you’re in a safe place and I’ll stay right here with you.” He is a big love bug but has a typical Westie attitude. Thank you guys so much for all of your help. It made the difference between life and death for Dunkin.