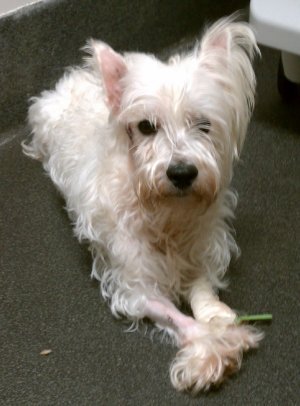 Emerson is a six-year-old male Westie that came to Westie Rescue of New England from another local rescue in early January. Immediately upon Emerson’s arrival, his foster Mom noticed he had a terrible cough and seemed to be having trouble breathing, he was weak and unable to eat. Emerson was taken to the emergency vet where he was diagnosed with a collapsed trachea. We were told his ONLY chance for survival was stent surgery to open his airway. The cost of the surgery was estimated at $5,000. That was a huge amount of money for our “little rescue” but felt we had to give this poor little boy a chance at life… so we gave the surgeon the go-ahead. The custom stents were ordered and we prayed hard that Emerson would be alright as he waited in ICU for life-saving surgery. The surgery was a great success and Emerson’s breathing immediately changed. He was more active and eating well…. he was a new dog! Shortly after his stent surgery, Emerson started coughing again. We were worried that something had happened to his stents and his foster Mom rushed him to the emergency vet again. Emerson was diagnosed with pneumonia and had to spend another week in ICU. The day before he was scheduled to come home an old injury on his face filled up with an infection and burst and now he had to undergo surgery to implant a drain in his little face. The infection was found to be antibiotic resistant and a special formula had to be made to treat him. The total for that hospital stay was another $3,400. He made progress and was happy to go back home with his foster Mom. We are thrilled to say that he is thriving now. He is described by his foster Mom as the sweetest little boy ever and it is obvious that he really enjoys life! Our cost had now reached nearly $9,000 to save Emerson and our funds were left pretty much depleted. We were worried that should he need another hospitalization we would not have the funds to pay for it. We also needed to make sure we had funds on hand to continue to be able to help other newcomers to our rescue as well as maintain the unadoptable forever fosters that live out the rest of their lives in our volunteer homes. Emerson will require to follow up care twice a month for the next three months and then after that as needed. He is a wonderful little soul and we are thankful that he is doing so well since his surgeries. He has been through so much but always kept fighting and we were never ready to give up on him. Emerson is truly a special little Westie. Our hope is that someday he will find a wonderful forever home but if not he will stay in our care for as long as needed.

When we got the news that Westie Med was approving our application and giving us financial assistance it was the best news ever!! Your help means more than you know and our gratitude is beyond words. We are grateful to the Board of Directors at WestieMed and we thank you for helping us help Emerson.

Emerson was able to instantly breathe after having three stents placed in his trachea.

Thank you for your help. He has had an ongoing infection in his left ear caused by a foreign object. He has a fistula on his cheek that continues to drain pus daily as a result. The vet thinks that some of the pus draining into his trachea has been instrumental in his two bouts of pneumonia. He will be going back for an ablation this week to hopefully finish his problems. He is a great little guy and loves life. He is a joy to everyone who knows him.

Once again that’s for your help we are a small rescue and every penny counts. After this week we will have spent $20,000. So your help was invaluable.