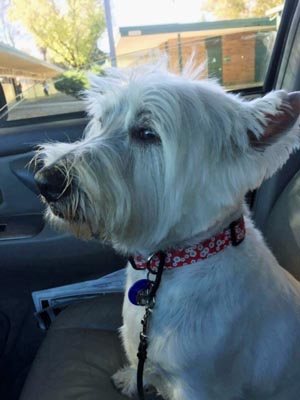 Maggie is a six-year-old Westie girl whose family couldn’t take care of her anymore due to a change in life circumstances, in this case, because the grandchildren came to live with them. Maggie had been in this family since age eight weeks. She is a sweet, loving girl and was fine with the children but the owners felt it was better for her to find a new family. Not knowing what to do they gave Maggie to a “friend” to find her a home. The friend was well-meaning but did not have the resources to accomplish this. So for a month, Maggie lived in one home or another (there or four) that didn’t work out. Maggie was understandably upset and not understanding what was happening to her so she had a lot of accidents.

Westie Rescue and Placement of Northern California (WRAP) heard about Maggie’s plight and was finally able to get the release from the owners so they could find Maggie a fur-ever home.

After the owner’s release came in, the person with Maggie told WRAP Maggie had a limp. No one knew how it happens, naturally, but it appeared recent and the doctors agreed. WRAP took Maggie to the doctor right away for treatment and also found a patient understanding foster family. The foster family wants to adopt Maggie when her leg is better.

WRAP took Maggie to a specialist in San Francisco (after trying less invasive treatment) who said she needs surgery to repair the torn Cranial Cruciate ligament in her right rear leg. Maggie has thrived with her foster family and has had very few accidents. She enjoys her two Cairn foster sisters. There is a great yard that Maggie loves to explore and she loves the walks every day even though she has to use the stroller.

Maggie’s prognosis is excellent and thanks to WestieMed she will be getting her surgery sooner than later.

Since Maggie’s leg surgery in December 2016 Maggie has fully recovered. She was adopted by her foster parents after the doctor gave the all-clear on her leg. That was March 21, 2017. Maggie’s dad says she has thrived and has had no
problems with her leg at all.

She enjoys her daily walks (sometimes up to two miles) and chasing squirrels in the back yard. She is a sweet, loving, and gentle girl who loves people and other dogs. She loves to cuddle with mom and dad on the couch in the evening and watch television.

Her Cairn terrier sisters are much older than she is (by seven and nine years) but there has never been the least problem. She can be stubborn and get a little Westitude on occasion if she doesn’t want to do something but with prodding she will finally agree.

Maggie’s leg surgery was in December 2016. She has fully recovered and been adopted. She loves her yard and chasing squirrels. In the good weather, she spends as much time as she can outside. She continues to enjoy her daily walks to the nearby park and down to the local college.

Maggie is an endearing girl who loves interacting with people and other dogs.  She recently attended a Halloween Event with her Carin siblings the rescue hosted. She can be stubborn and get a little westitude on occasion if she doesn’t want to do something, but with a little coaxing, she will finally agree.

Maggie and her family are very grateful she was able to have the surgery which has given her a normal life.