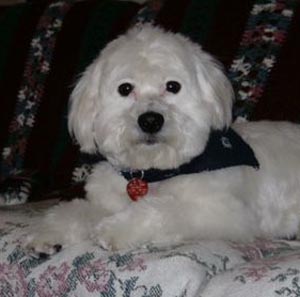 I guess you could call it love at first sight, at least on our part.  We wanted to add a dog to our family after recently adopting a rescue kitty.  Morty was captured as a stray on March 24, 2016, without any identification or indication of ownership.  He was taken to Foothills Animal Shelter in Golden, CO and placed in a holding area.  It was determined that he was about three years old, a Westie/Lhasa mix and was not neutered.  That is all we knew about him but he was patiently waiting in his cage while other dogs around him were barking and trying to get attention.  By March 31 we were told that someone had placed a hold on him.  My husband wanted that little dog so we asked to also be added to the hold list.  April 1st the shelter called to tell us the potential adopter had changed his mind and could not take Morty after all.  We rushed over to Foothills and had a meet and greet–the bond was immediate.  In the interim, two more people inquired about adopting this handsome fellow, but he was ours!  We also did a “cat test” at the shelter to see how Morty would react to our own kitty.  He didn’t pay any attention to the cat.  It was a much different story when we got him home and he and Jessie faced off.  We are still working on that little arrangement!

Morty was a dirty little doggie and had just been neutered the day before we brought him home.  He was hurting and uncomfortable but never grumpy.  Then we noticed the huge lump on his right flank.  He was at our vet the next day where he got an e-collar to prevent licking his surgery sight, which was looking pretty nasty.  They also gave him antibiotics and a mild tranquilizer to ease his discomfort.  The vet did a needle aspiration on the mass and said she didn’t see cancer cells but the cyst contained bacteria and should be removed.  Cost estimates of $658 to $1000 on top of hefty adoption fees, licensing, outfitting, food, toys were a little overwhelming but we wanted to do the right thing for the newest member of our family.  Adopting rescue pets is not for the faint of heart, there is no history and your pet cannot tell you what they have been through.  You have to feel something in your gut to help make this important decision.

Enter WestieMed on my Internet search.  I submitted my application and a photo per requirements.  I was amazed to hear from the organization only two days later.  They needed another photo of Morty’s ears and tail to help determine the breed mix.  Less than a week later we got word that our application was APPROVED and a grant would be made.  We were so relieved.

Morty is a loving, entertaining, energetic and happy dog who has found a place in our hearts.  His feline sister is still deciding!  All of us are grateful to the WestieMed Board for their financial help.  Now, on to that surgery.

From the Duman Family: “Morty had his surgery today and is doing well. It was possible due to your gift. With that big cyst off his flank, he will be more handsome than ever!”