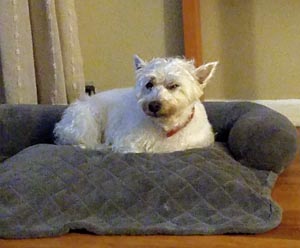 My two sons are 21 and almost 19. They are fine young men growing up and pursuing their lives. As such, it left me and my husband with more alone time than we were prepared for. I found myself feeling like another dog, a Westie, would help fill the void.

We already have one Westie boy, Harley, whom we rescued almost ten years ago from Westie/Cairn Terrier Rescue of SW Ohio. He is the apple of our eyes and we thought a new addition would be nice for our family.

Enter Chloe. She’s such a boisterous little lady, who captured our hearts right away. The boys love her and she loves them. More than anything, Chloe is a “daddy’s girl”. She follows my husband around the house constantly. I am her back up, parent.

We are lucky enough to know her prior story before coming to Rescue or to us. Her owners were an older couple. They were advancing in age and health problems. The Mrs. was becoming increasingly allergic to Chloe. They had to make the difficult decision to rehome her. I had just called Carla from the rescue and told her to keep an eye out for another Westie. A week later we get a call saying she had a Westie for us to look at.

We picked up Chloe on February 24th and all of us fell in love with this silly girl who captured our hearts with her sweet face and her antics. There was much to do to help her to adjust to her new home. That first evening, however, I noticed her left eye was not looking quite right. That very first night, we took her to the vet to have a look. The vet told us she thought it was a possible cyst and referred us to an animal ophthalmologist.

Two weeks later we saw the specialist and were given the bad news. Chloe has cancer in her left eye and it is not just a small spot but a large one and the docs are unable to “repair” it to keep her vision; they can only take the eye out. I was devastated to think of my little girl losing her eye. However, the doc tells us that dogs are way more adept at changes like this than humans. In fact, he thinks she has not been seeing very well, if at all, with the left eye-so this won’t be a huge change for her. All four of us were so overwhelmed that we were in such a whirlwind after just getting Chloe.

I am so glad that WestieMed is helping us with her surgery and we don’t have to worry about all the finances of this. We can help our new little Westie girl recover and adjust to her new normal with all the love we can give her.