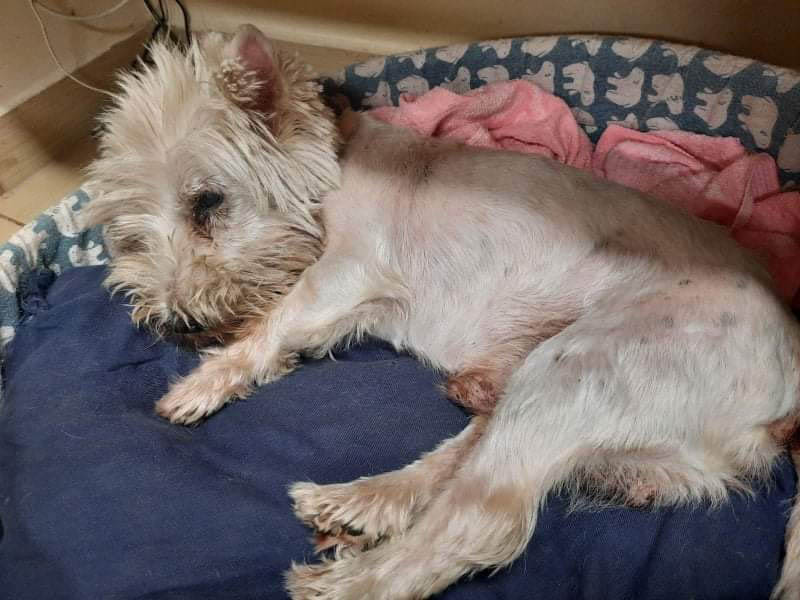 The story of Hungarian Bandi

Bandi is a 14 year old Westie gentleman, who never had the life a Westie supposed to have.

He was found in 2020 on the streets of Eger, Hungary in a very bad state. The local shelter knew him already, as he was wondering around many times. Previously he had a better life (maybe), but when a newborn came to the family, he was given to the grandmother, who obviously did not gave a damn. This time he was so dirty, so weak and hurt, that they immediately contacted us. Together we achieved that the owners give him to our care. In Hungary, the legal procedures of animal protection are quite complicated, so this was the fastest way to have Bandi and help him.

We took him to our vet immediately. He had holes in his back area (under the tails), worms were coming out from the wounds, we have never seen anything like it. He had a papilloma on his eyelids, hurting him all the time. He could barely walk due to a previous injury and he was underweight. He was very kind and grateful for the care, he knew that his life will change from now.

First we started to take care of the wounds, he got antibiotics and immune boosters. Obviously it needed time, but they healed very well. When he was strong enough for his first surgery, we had his eye fixed. Thanks to the great care, he took anesthesia without any problems. Then he had a couple of months break before we had the orthopedic surgery to remove a fractured femoral head. He had some complications afterwards, seemed that some nervous problem, but with proper medication we could make his status better. He regularly have physiotherapy treatments since then. The last surgery after a another break was neutering. We did not want to put him through another trauma, but he had a tumor in his testicles and we wanted to make his life as long and as healthy as possible. So he had 3 surgeries within a year, which is quite a lot in his age, but he recovered well.

Bandi found his furever home with the lady who took care of her during the rehabilitation. He is now living the ideal senior life, having his own bed, yummy food and a mom, who cares for him and will love him until his last heartbeat will come.

Thank you WestieMed that you made this happen and helped us make Bandi such a happy guy.