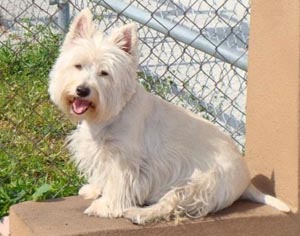 Lucky was an owner surrender. His owner bought him from a pet shop and became tired of him being a “nasty dog”. She admitted she worked long hours and would leave him crated for over ten hours a day where he would pee and poop all over himself and she was tired of cleaning him.

When Lucky Dog Rescue got him, his coat was yellow from pee stains and his teeth were horrible. He was very sweet and loving but is a little testy with dogs always doing a deep growl/grumbling sound. He was taken to the groomers and given three baths…they said they even bleached his coat. With all that he still remains an off white/cream color. He also saw the Vet and was found to be in great health but a little overweight and he got his first teeth cleaning and luckily…no pun intended…his teeth were ok.

Recently, he injured his leg while playing and had to undergo ACL knee surgery for the right leg… he had already undergone the same surgery in the other knee but this one seems a little harder for him to handle as his balance is a little off.

He is now being cared for by my family and has bonded with my 3 boys, 2 of whom are mildly Autistic…they refer to him as “Lucky Puppy” even though he’s 10 years old. Hopefully, this is the end of his troubles and he’ll live a long and healthy life full of love.

Thank you for helping Lucky!

Lucky’s surgery went well but his recovery was a difficult one. He became extremely agitated with his cone, his bandages slid down and caused swelling and refused to eat. We removed the bandages and cone and he began to eat but quickly turned and pulled out staples. We took him back and he was re-stapled. His therapy was going well but he was still in lots of pain so he went back to see the surgeon.

It seems he possibly had some nerve damage causing him to turn his leg a bit inward and the muscle atrophied a bit so he leans his weight on his left side. Considering his age and difficult recovery we declined any further surgery and he is on pain management as needed.

He was placed in a foster but it seems he’s dog selective. He growls and snaps at other dogs if they get near him so he came back. Since I have senior dogs he seems to be fine with their energy and definitely loves my boys…I think he knows they have issues of their own and somehow they understand each other.

If he chooses to live out his years here, that’s fine…he’s a great guy and total love bug. I have enclosed some pictures so you can see what he went through but no worries as now he’s just fine.

Thank you once again so much for helping this sweet old boy.

Lucky is doing great! The leg took longer to heal than expected for some reason. He was very stiff and had lots of tenderness so he got lots of Massage Therapy and is running around like normal now.

He’s very cuddly and loving and demands attention by nudging you with that nose and he does a cute little tap dance when he’s waiting for you to feed him the kids really like it.

Thank you again for all your help with Lucky.