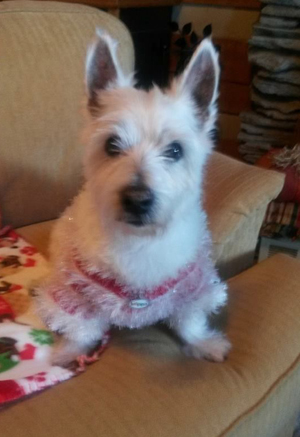 Holly age thirteen and her bonded sister Hannah age eleven, came into foster care with me through Westie Rescue of Missouri in September of 2014 after their human parents divorced, and they were taken to the local shelter and left. Holly and Hannah both had skin issues and needed to be totally shaved, both were also in need of dentals and had between them needed a total of fourteen teeth removed. Holly upon entering rescue was noted to having heavy yellow staining to her tail and hind legs with constant squatting to urinate noted. We knew that for Holly to have such heavy staining to her hindquarters she must have had a long-standing untreated UTI or possible bladder stones. WRM provides excellent care for Holly with extensive blood work and x-rays to try and determine the specific of Holly’s problem. X-rays showed no stones and urine analysis showed a typical UTI. Holly immediately went on antibiotics and improved with no signs of infection after her antibiotic where finished. A short two weeks later Holly presented again with symptoms of a UTI and again a urine annalist and x-rays were done with no stones noted but infection present in her urine. A double dose of antibiotics was prescribed for Holly and once again she improved quickly. Holly and Hannah by this time had been with me their foster mom for two months with no interest from anyone in adopting them. I have fostered more Westies then I can count over the years and have loved and wanted to keep each of them, but always knew in my heart that their forever families were out there somewhere waiting for them and it was for me to help them on their journey to finding their forever families. Till Holly and Hannah arrived. WRMS policy is to never separate a bonded pair and I knew in my heart that they were mine. I adopted Holly and Hannah on the first of November and all seemed well till the next day! The day after adoption Hannah and Holly both presented with health issues. I will at this point set sweet Hannah aside, to share about Holly. Holly once again presented with signs of a UTI. Test, x-rays, antibiotics. Repeat this scenario two more times. Holly’s vet decided that Holly had possible bladder stones that were not showing up on x-rays and would need an ultrasound done to determine if stones were indeed what was the underlying cause of Holly’s persistent UTIs. I live in a rural area and so a two-hour drive to the nearest vet specialist in St Louis, who could do an ultrasound was scheduled. Taking an unpaid day off from work for me and my husband was necessary to get Holly to the specialist for her appointment. The specialist immediately felt that Holly presented with more confusing symptoms than just a bladder stone and set to work requiring an extensive blood panel, ultrasound and a sterile urine sample (taken by inserting a needle into her abdomen to acquire the clean sample needed.) The results of her ultrasound showed no stones in her bladder and the specialist determined that Holly had been born with a fold of skin that partially covered her vulva. Through the years the skin had become thicker and heaver covering more and more of the vulva. The skin would not allow all of her urine to be eliminated from her bladder, would gather and breed germs, that then travel into Holly’s bladder creating the ongoing constant problem of UTIs. Specialist office visits, ultrasound, sterile urine samples taken, totaled over $800 and the missed days from work all creating a hefty amount, that would have been financially draining for us and now Holly faces surgery to correct the problem which will be the only way to ensure the UTIs that she has been plagued with all her life stop. Holly’s surgery estimates are given to us as being at $1,000 and up. Thanks to WestieMed we know the problem and will be able to provide Holly with the surgery needed. Holly is scheduled for surgery after the first of the New Year. Unfortunately while dealing with Holly’s issues we have also been dealing with her sister Hannah’s health concerns. Hannah has been diagnosed with fast-spreading bone cancer. Since Holly and Hannah are so very bonded we feel that it is in Holly’s best interest to see how things go with Hannah, and how Holly adapts to her life long companion being gone from her life. We will be monitoring Hannah closely and when the time comes that we feel she is ready to go, we will be with her to whisper in her ear to tell her what a good girl she is, that she is loved and we will walk her across the Rainbow Bridge. We are told it will not have her much longer. Our concern is that surgery may be too much of a hardship on Holly so quickly and so WestieMed has been kind enough to grant us extenuating circumstances to see how Holly does and postpone her surgery for a while if needed. I do not regret adopting these two precious girls as my own. Short though their time with me has been, I love them dearly and they have enriched my life. We would have moved heaven and earth to get them whatever care they needed but our thanks to WestieMed will never end for having to not concern ourselves with the finances of how we could manage it all. Because of WestieMed and their generous supporters and donators we can focus on loving and caring for Hannah with whatever time remains with her and making sure Holly has the best care possible as she goes on in her life without her best friend.

I wanted to let WestieMed know that Holly passed away. She had developed some sort of neurological disorder over the past month that we were trying to determine the cause of when she became paralyzed and was in considerable pain. I am crushed. Thank you to all at WestieMed for the financial support for Holly. Oh, how I wish we could have fixed her. It just was not meant to be. I would not have traded my short time with her for anything. 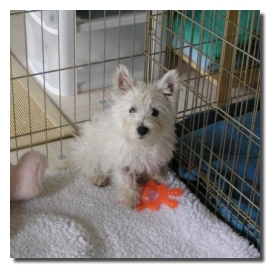 Poppy (aka Roxie) was born with a congenital liver shunt. She was a sick puppy and showed signs of neurological problems such as running into walls and being confused. She also had problems gaining weight.

Her first owner was a relative of the breeder who bred Poppy. They took her to an emergency clinic and they diagnosed her as possibly having a liver shunt and recommended more tests. She was then taken to their local vet and where was once again told the puppy most likely had a liver shunt and would need more tests. The veterinarian advised them that this was a sick puppy and would likely not survive without surgery to repair the shunt. The owners said they would think it over.

Approximately three weeks later on May 4, 2005, Poppy was found by a very nice Animal control officer. Poppy was only three months old, cold, thin, and filthy dirty. She was very disorientated and the Animal Control officer brought her to the local Animal Hospital. One of the staff recognized her and contacted her owners. The owners said neither they nor the breeder wanted to deal with the puppy so she was released to the animal hospital. Of course, all that met her fell in love with her, and the Veterinarian decided to do the surgery.

On May 6th, weighing only five pounds, little Poppy had her surgery. Carole – one of her soon to be foster mothers – took her home that night for observation.

That is were I come in.

I used to work at the clinic and still remain a sucker for a cute face. The day she came in, I was called to come to see how cute and needy she was. I became the second foster mother. Carole drops her off at my house on her way to work, where she hangs out until Carole gets off work and picks her up.

A week after her surgery I mailed a friend some pictures of Poppy and her story. Within 4 hours, I was bombarded with emails interested in Poppys well being. One of the emails was to inform me of WestieMed. Carole and I knew whoever adopted Poppy may face future financial responsibilities, so it would be nice if they were not burdened with a large medical bill to start with.

We are so grateful for the financial help WestieMed has given us for Poppy. As I am writing this, I am watching the little princess play with her tail, and I think how much I will miss her. But I know we will find the right palace for her.

She now weighs eight pounds and is four months old. Her last liver test showed an improvement, and she acts like a typical four-month-old terrier. She shows no signs of neurological or any other problems. No one knows if she will live a long normal life, but she at least now has a chance. The veterinarian has given us the okay to place her, and with the help of Westie rescue in finding just the right home, we will have to give her up.

From everyone who has helped Poppy, I wish to extend my gratitude to WestieMed for helping, as well as to all who have contributed to such a great organization.

I have enclosed a current picture of her after her first hair do.

Princess Poppy went to a new kingdom on June 6th. Her new servants are Charley and Sue from Washington. Of course, they have realized she is very smart as she has taught them many tricks. Such as pick me up, let’s go for a ride and you can watch tv with a dog on your lap. She has also taken up gardening and is very good at weeding. She also has her own room as well as taking over the entire household. Her new doctor is very pleased with her health and she has already received more vaccines and a microchip. I have enclosed a picture of her new parents on the day they picked her up. Sue and Charley also pass on their appreciation for the help WestieMed has given to Poppy. Yes of course we miss her and keep in touch.