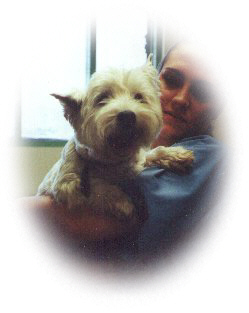 Dachary was one of four Westies that were given up to Westie Rescue. They ranged in age from the youngest at four years old to Dachary at nine years young! The rescue was told that the dogs were all “healthy” – this proved not to be the case.

Dachary was in the worst physical condition of the four. Her problems were many. A visit to the veterinarian revealed the following:

In the hands of the rescue group of the West Highland White Terrier Club of California (WHWTCC), and with financial assistance from WestieMed, Dachary’s treatment began. While under anesthesia the tumors were biopsied, the ears were treated, and she was spayed. Westie Angels were looking out for Dachary as all the biopsies came back benign!! Her caring veterinarian did the teeth cleaning and extractions at no charge to the California club.

The WHWTCC rescue group thought they would have a difficult time placing Dachary due to her age and special needs involving her ears and eyes but they had TWO families interested in adopting this special Westie. They made their decision and Dachary’s new owners think she is the sweetest dog in the world – even if she is “high maintenance”!

Dachary’s medical bills were quite large. WestieMed was a significant factor in getting Dachary the treatment she needed to be healthy enough to be adopted. The West Highland White Terrier Club of California along with Dachary’s new family would like to extend their gratitude to WestieMed for their generosity.

Here is a photo of Dachary and her family at “Westie Festie.” As you can see, we are all very happy.

I sent the message below to Westie Rescue earlier tonight:

I am sorry to report to you that Dachary, who you brought to us in 2000, died Monday from pneumonia at nearly 16 years of age.

Although she was ill for the last few days, she was spunky and Westie-like up to that point. Her passing was peaceful and she was in the company of those who loved her when it happened.

On behalf of my wife, my son, and myself, I want to express our profound thanks and appreciation to Elaine Delgado and everyone at Westie Rescue for allowing us the opportunity to have this wonderful companion for five-plus years.

We loved Dachary very much. There is no way to express fully how much joy, warmth, laughter, and relief from the heartache she brought to us. We are grief-stricken at her loss but will cherish for years to come to the many wonderful memories she provided.

Again, thank you for bringing Dachary to us. A check-in her memory is on its way to you to support your worthy efforts. We hope that the contribution will help others to experience the pleasurable insanity of having a Westie in one’s life.

We are equally grateful to your fine organization. If not for your hard work in restoring Dach to health, we would not have been able to adopt her and have this wonderful experience. A check-in Dach’s memory is on its way to you also. It is nice to see that she is still on your website, and we hope she will stay there a while longer.