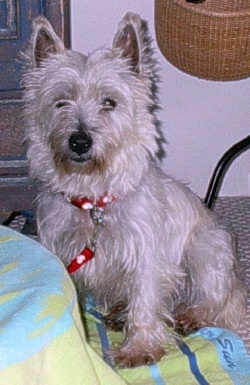 I was searching on Craig’s List and I found an ad for a Westie that needed to be rehomed ASAP.  Apparently the owner’s 2-week old baby was allergic to the dog. I was drawn to the ad because I am a previous Westie owner (three Westies, one I rescued from Westie Rescue of NE in 1999, and the other two were bought from breeders).

I replied immediately to the ad via email. The gal called me back and I had the opportunity to ask a few questions.  She told me the dog’s name was Priscilla, she was two years old, twenty pounds, and she had to find a home for her as soon as possible and asked if I would meet her that evening.  I was a little weary with the urgency but I decided this was my chance to possibly meet my new Westie.  She asked me to meet her in a parking lot which I found rather odd.

When I arrived the gal got out of the truck and was holding Cilla (her nickname) and poor Cilla was trembling and her legs were out straight as if she was afraid this gal was going to drop her.  I tried to make eye contact with Cilla but she would not look at me even when I cupped my hands around her face.  I asked why she was behaving this way and the girl told me she was scared because she had been confined to the basement.  This made me sick.  I asked the gal to put her down to see if she would settle down a bit.  I looked at Cilla and saw how thin and boney she was, I knew at this moment she was nowhere near twenty pounds.  Right then and there I knew she knew little about this little Westie.  I picked Cilla up and held her close and she relaxed just a little bit.  It was clear that she just needed someone to care and love her.  I think she knew I was not going to hurt her.

I told the gal I would send an email that evening with a decision.  On the way home, I knew something just didn’t seem right and that I needed to get Cilla out of this situation somehow.  As soon as I got home I sent her an email and told her I would take Cilla.  She accepted my offer and we made arrangements for me to pick her up in the same parking lot.  On the morning of the exchange I received an email that someone else was going to be bringing Cilla to me.  I knew at this point, I definitely made the right decision for this little Westie.  She had been passed around so many times just in two days and who only knows how many other times.

Cilla came with nothing but a sandwich bag of dry dog food a leash tied around her neck even though I asked for her toys/blanket, etc. I wanted something from her past-not knowing it was a bad past as I learned by her behavior.  She spent the remainder of the morning, day and night sleeping and hiding in my house.  She ate a little at dinner time and then was up all night violently vomiting.

First thing in the morning I brought her to my vet and at that point I learned about Cilla’s severe dental problems and I also received confirmation that she was malnourished, visibly neglected and possibly abused.  My vet stated that Cilla was not two years old as I had been told.  She is middle-aged, probably six or seven years old. I also learned how much it was going to cost to get the badly decayed teeth extracted, the others cleaned and get rid of the awful infection she has.

The doctor knew that I was a single mother and that it was financially impossible for me to get the appropriate care that Cilla needed. Dr. Gerow suggested I called the Westie Rescue League and try to find her a home that could afford to take on this sweet Westie with health problems.  I left the vet and was absolutely heartbroken for this little girl that I and my 14-year-old son had already started to grow attached to.  I was very familiar with the Westie Rescue League of NE and had a contact name of Susan Smith from a few months ago when I was looking to rescue another Westie.  I told her Cilla’s story and she could hear it in my voice that I didn’t want to give this little girl up.  She suggested I call WestieMed organization. I did as she suggested and received a call back almost immediately.  I spoke to a wonderful person named Lucy who directed me to the application on their website.  I completed the application and the rest is history.

WestieMed is going to help get Cilla back to good health and allow her to stay in a loving home.  Cilla is a gentle sweet girl that deserves anything and everything I can give her.  Thank you WestieMed for giving my Cilla a second chance, and sincerely thank each one of the Board of Directors for their consideration.  I am elated with your fast response, your organization truly rescued this dog.

Cilla spent the day at Methuen Vet and had her procedure today and did very very well.  She is resting comfortably in her own bed at home tonight.  Her diagnosis was incredibly great.  The doctor did NOT have to extract any teeth. She said that Cilla had a very large amount of tartar build-up on her teeth (more than the average) which was causing her discomfort.  They literally had to chip off chunks of tartar while hoping they didn’t break any teeth, which they did not.  They also think she was crated longer than she should have been as some of her front teeth are worn down from chewing metal or some type of very hard material.  It breaks my heart to think that anyone could do anything to harm a helpless animal.

Cilla weighed in at a whopping 14.3 pounds today up from her 13.2 pounds when I rescued her.  This is partially due to her now eating a prescription canned dog food for sensitive stomachs and was gentler on her teeth until we could take care of her dental issues.  Her appetite grew slowly but steadily in the past week and a half.  It certainly helped her bulk up, so to speak for her big day today.  She will be weaned off the canned form of this food and put on the solid kibble form for now and then will graduate to another prescription food  which is specially formulated for dogs like Cilla.

The doctors would like to see Cilla gain another three to four pounds and I am absolutely positive she will be able to do this now that she’s had her procedure.

I want to thank WestieMed and the Board of Directors (especially Bette, WestieMed’s Application Coordinator and Lucy, WestieMed’s President, who I’ve dealt with personally) for the support and the same heartfelt hope that I have for Cilla.  I also want to give Susan Smith a special thank you for referring me to your organization.  Without Susan, I would have never found you.  All of you are very special people to me and deserve so much more than I can give you right now.  I thank you from the bottom of my heart for making this possible for Cilla and giving her a very hopeful, healthy and happy life ahead.

God Bless all of you and all of your little Westies.  I wish you a very Happy Holiday Season as my family certainly will, now that we were able to give Cilla the special gift she received from you.

P.S. I have attached a recent picture of Cilla with her new friend Booda the Hedgehog.  She has grown pretty attached to this guy and sleeps with him every night.

I want you to know that Bella has come a long long way.  She is a different dog than the one I rescued.  She is so very sweet, well mannered and mild-tempered.  She’s so much happier now that she’s in a loving home and eating very well (thanks to WestieMed).  I don’t think she even remembers the terrible life she had before.

She has grown very attached to me, as well as my son, and has truly overcome her fear of strangers.  She is very playful now, so much more than she was when I rescued her.  Sometimes I catch her playing by herself with her toys.  I can hear her running around the house tossing her toys and chasing them.  It’s music to my ears and it’s the funniest thing.

I can’t tell you how many people I have sent to your website to just read about all the wonderful things you all have done for Westies.  Your organization has truly helped so many Westies and I thank you for that and can speak for all the Westies you have helped.

If it wasn’t for WestieMed, I don’t know what Bella’s future would have held.  I thank you once again and always will for taking care of my precious Bella.  We love her so much.