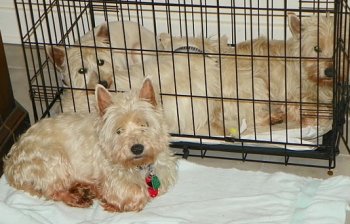 In March eight dogs were rescued from a Missouri puppy mill. Foster homes were needed. We, the WHWTSOC, offered to take four of the dogs into our rescue program.

With the transport help of eighty-five (85) people, Geno, Penny, Maya and Connie arrived in Connecticut.

They were tired and very timid. They were vetted the very next day and found to be infected with giardia and treatment was immediately started. Two days later all were examined and blood work was done.

Geno had very high liver enzymes and was started on antibiotics and liver supplements. He was scheduled for an ultrasound and needle biopsy. It was determined that he did have a form of hepatitis, and possibly a bile duct blockage. Medication for this was started. A repeat blood panel showed the liver enzymes were coming down but not significant enough to do a dental or neutering. His other blood work improved to normal.  Geno, whose appetite was poor, improved rather quickly once on medication. He is quite loveable but very close to his sister. He loves attention and will interact with his foster mom.

Penny, other than a limp and in need of dental work, was x-rayed with no clinical findings. She had her teeth done and was spayed. She is more outgoing than Geno or Maya.  She would only eat out of your hand or off the floor.

Connie is the most outgoing of the four. Rather pushy when it comes to getting attention.  She was losing some fur and when spayed, she still had some milk so it was obvious that she had recently whelped. A thyroid panel showed no problems as did all her routine blood work. She had her teeth tended to also.

Maya was very timid and would not come out of the crate and hid behind her two sisters. She only eats if no one is watching her.  She had been shaved to the skin because of matting. Her physical exam showed extensive dental disease and required nine (9) extractions. She was spayed two weeks later.  Still timid but she is coming along nicely.

All four love being outside on grass although at first walked very gingerly.  They are learning how to walk on a leash, Maya is not so eager to give it a try.

Connie and Penny have found new forever homes and Maya hopefully will be going next week. Geno will not be available for adoption until he is completely healthy.

The new adoptive parents know they have their work cut out for them as these little fur kids still need to completely trust and experience the joys of a newfound life out of the living hell they were living in.

Our expenses were quite considerable and with the help of WestieMed we were able to give the four the care and treatment they deserved.