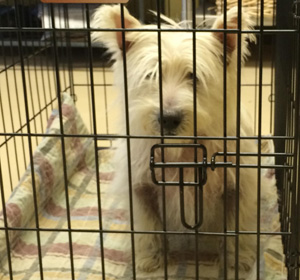 Casey is a five-year-old male Westie that was surrendered to Westie Rescue of TN and AL in July 2015.  His owner had been dealing with Casey’s medical issues for several years and nothing was helping.  She realized it was time to turn Casey over to someone that could help him get well and contacted WRT/AL.

From looking at his pictures before we picked him up we initially thought he had the typical Westie skin and ear issues but soon realized that it was much worse than we thought. When he was picked up by volunteers Diane and Patsy, his eyes were matted, his ears were red, swollen and full of scabs, and his hair was non-existent in places on his body, particularly around his backside and tail.  The poor little one was pretty miserable and in obvious pain, as he would cry out when you touched him on his head.

As Casey was in desperate need of a bath, he was whisked off straight to a tub for gentle cleansing.  Through all his pain and the turmoil of that afternoon he never growled, snapped or fought our help.  He was such a gentle little soul and just looked at us with confusion, yet love. He knew his life was going to change for the better.  He seemed so appreciative of the smoothing bath and care he was getting.

Casey had always been an outside dog so he was not accustomed to being inside in nice cool air.  We had to laugh at him in that he realized very quickly inside the house was much nicer than outside in the humidity and heat.  After being taken outside to dry off and “take care of business” he immediately found the back door and sat waiting to get back inside.  Smart Westie, no more living outside for this little guy.

The next day Patsy took Casey to our wonderful vet at South Franklin Animal Hospital for treatment.  Casey spent two weeks at the vet’s office being treated for his skin, eyes, and ears. He won everyone over at the vet’s office with his soulful eyes and gentle Westie personality. While his eyes and skin will heal with treatment and medication, unfortunately, his ears are going to require surgery. The infection and mineralization in his ears are to the extent he will have to have all the infected tissue and entire ear canal removed from both ears for any hope of controlling his pain.  And this is where WestieMed comes to our rescue by donating to his surgery.  We cannot thank them enough for contributing to his care.  Casey is one sweet little guy and deserves a chance to live life without pain.

Right now he is with one of our wonderful fosters, Sandy, waiting for his ears to heal to the extent he can have surgery.  He is loving being an inside pet and has made sure his “human” knows she belongs to him.  His foster Mom reports that his “Westitude” is beginning to emerge and he is doing great.

We anticipate his surgery to take place within the next couple of weeks and we will update everyone on his progress.  Thanks again to WestieMed for supporting Westies in need.

Casey is doing wonderfully and is now up for adoption. His ears finally healed to the extent that he was able to have his surgery in early September. As it was a very extensive surgery and involved both ears, the healing process took a considerable amount of time.

Additionally, obviously parts of his head had to be shaved and for some period of time, he was styling with a mohawk cut so we wanted to wait until he looked a little less “punk” Westie, ha. He is now pain-free, finally after 3 years of enduring pain so intense you couldn’t even touch his head to love on him. He is a happy-go-lucky Westie, full of Westitude and loves to share with someone.

Thank you WestieMed for your help with Casey and so many of our other LWDs around the country. Casey sends tail wags and Westie kisses to you all.