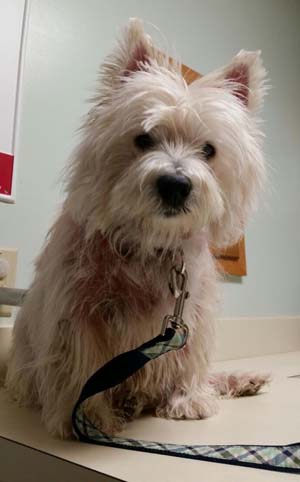 We recently received a call from a local vet about a Westie in urgent need named Rupp.  He is five years old with severe skin allergies and his owners dropped him off to be euthanized.  The vet knew that with the proper medical care, right home, and time, he could recover.  Unfortunately, his family felt that they didn’t have the time, resources, and energy to care for him any longer and wanted him euthanized that day.  Instead, the wonderful vet convinced them to surrender Rupp to the clinic to give him a chance.  The vet called our rescue group and asked if we could take him in.

We didn’t even pause and said what time can we pick him up?  When our volunteer arrived she said Rupp had the worst case of skin allergies she had ever seen.  He was covered head to toe with open sores, oozing wounds, scabs, flaky itchy skin, and extensive hair loss.  He was immediately put on antibiotics, anti-fungal meds, pain medication, and medicated baths daily.  Even though his skin was really bad, the worst part of his condition was you could look into his eyes and see he had given up on life.  He was in a lot of discomfort and felt defeated.  He just wanted to be left alone to lay in his bed and had no interest in eating (and what Westie doesn’t want to eat).

We knew that besides healing him physically, we needed to help restore his Westie spirit.  After a few weeks, his skin improved and his wounds were healing.  Best of all, he started to perk up, bond with his foster family and started to play with their Westies.   Toys started to interest him again and he even destroyed his first plush toy in true Westie fashion.  Despite all his progress, his itching was not improving.  The vet determined that we could continue to treat his flare-ups with medication, but his best chance of complete and full recovery was to see a dog dermatologist and start allergy treatments.

Allergy treatments can work miracles, but they are expensive and cost more than we can afford, especially as a new rescue.  Fortunately, WestieMed has stepped-in to cover his allergy testing and treatment so Rupp can have a long, healthy, and happy life.

We are so extremely thankful to WestieMed for being Rupp’s guardian angel and providing the funding for medical treatment he so desperately needs to he can recover and find his new forever home.  Thank you again so much!

Thanks to WestieMed, Rupp was able to receive allergy testing, allergy shots, and daily medication to help control his severe allergies.   It was a long road for him to recover and for his hair to regrow.

We had many setbacks with flair ups and more medical treatment, so he stayed in his foster home for ten months total.

However, after a lot of searching, we found the perfect home for him in Louisville Kentucky. It seemed like it was meant to be since new mom Megan is a pharmacist and is very knowledgeable and comfortable giving allergy shots, medication, and lives only a few minutes from his vet dermatologist!

He now also has a new Westie sister named Lexi who has shown him the ropes including where the squirrels like to hang out in the back yard.

Without WestieMed Rupp would not be starting his new life.  Thank you so much for helping these little white dogs!