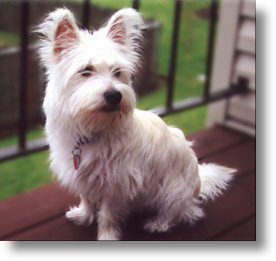 Romie, now eight months old, was rescued from a woman in Washington state who claimed she was going to put her two-month-old puppy to sleep because she could not find him a home. When rescued, it was apparent that Romie was very sick.

The vet ultimately diagnosed giardia, then it was treated, and cured. Things were going great until six months later, or this January, he lost his appetite greatly. He was very tired, lethargic, he constantly vomited, and had the shakes. Anything he tried to eat or drink was thrown up. Even if he did not eat or drink, he would throw up bile and acid. He would hide under the bed or in the corner. He was also dehydrated and depressed. Due to his constant nausea, he eventually refused to eat or drink anymore.

He was taken back to the vet with the thought that maybe he swallowed a foreign object. Blood work and x-rays were taken. There were no indications of any foreign objects. He was also hospitalized overnight a couple of times, given antispasmotic injections and such. Nothing was working. Then an exploratory laparotomy was done. They found an enlarged fatty tissue located slightly behind the stomach and near the entrance of the small intestine. It was still unknown if that was what the problem was. He was hospitalized for one week and was on fluid therapy. He came out and seemed fine for about a week and was given special canned food. He was still very lethargic. Then he started to throw up constantly once again. He also refused to eat. Once again, he was given injections that did nothing. A second doctor looked at him and recommended him getting tested for Addison’s Disease.

The results came in and sure enough, Romie was suffering from hypoadrenocortism (Addison’s Disease).

Romie’s vet bills, along with the required monthly medication, are very costly. WestieMed is glad to have been able to help defray some of those costs.