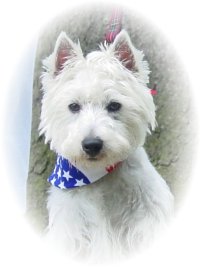 I guess Simon started his life like many puppies. From what I can determine he made the treck from a puppy mill in Kentucky to a pet store in Massachusetts. He was bought as a gift for someone who thought they were doing their friend a favor by giving them this cute little ball of fluff. He was four months old at the time. Simon’s new owner was ill and having personal problems and was unable to care for him, he spent much of his time alone in his crate longing for someone to love him. SOS dog rescue was contacted to see if a home could be found. He was put on the petfinder.com bulletin board and he was adopted out to a woman who had a small Cairn terrier at home already. The woman met Simon’s original owner at a rest stop where the transfer was made, apparently, the rescue felt this would be less traumatic for Simon than putting him in a foster home first. I’m not sure exactly how long he spent in his second home but he wound up back on petfinders.com again. The second owner said this eight-month-old pup was too rough on her Cairn who was getting upset and that he was somewhat of a wild child and she was not prepared for this. I applied to adopt Simon and after my application was accepted I made the two and a half hour trip to pick him up with my little boy Cairn in tow to meet his new brother. It was quite the trip I must say, we got into a hit and run accident on the way, had to go to the police station, etc. so our trip wound up being over four hours but we were determined (at least I was I can’t speak for my Cairn).

We arrived at Simon’s second home and were introduced to him. He seemed like a happy fellow but the first thing I noticed was a strong smell of urine. I wasn’t sure if it was his hygiene or what, but I packed him up and took him with me. I brought him to the vet the next day and found out he had a very bad urinary tract infection and had blood in his urine. He must have had it for a while for it to be this bad. The poor fellow couldn’t hold his urine in due to the frequency and discomfort, urine would just dribble out of him and he was constantly squatting. No wonder he was wild, he was sick and in pain. He was placed on antibiotics and was followed closely. It was also thought that he had stones because his urine had crystals in it but that eventually cleared and his x-ray came out ok in the end. Simon also had Giardia in his stool which is a bacterial infection that is highly contagious to humans and animals. He needed treatment for several weeks for this and my Cairn needed to be treated as well as the humans in the house!!!!!

It was over a month of treatment (which unfortunately included two catheterizations), and many hundreds of dollars later, that Simon was given a clean bill of health. He is now a happy go lucky Westie and has adjusted well to his new forever home and gets along well with his Cairn brother Fred. Just one look into those eyes of his and I know I did the right thing by bringing him home. All he needed was someone to love him and to get him healthy so he could grow up to be the beautiful boy he is. He will be 1 year old on August 20th, and as long as I have anything to do with it will spend all of his birthdays happy and healthy and basking in the love he deserves.

Thank you WestieMed for helping me with Simon’s medical bills!!!

Simon is doing fine. He lives with us in Vermont now, we just moved and are running a B&B  and he is an assistant innkeeper, in charge of entertainment!!! We love him dearly and are so happy you asked about him. I have attached a photo for you.