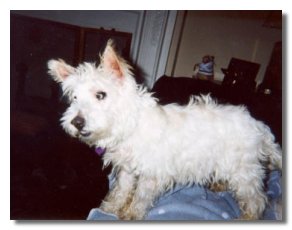 Dudley was found in an alley. He was deaf and blind and obviously in pain. Despite his condition, he was completely docile and was taken directly to the Emergency Vet.

Dudley’s eyes were covered with blackened, stiff, infection-caked fur. At first, we thought his eyes had been gouged out. His ears were entirely filled with something that had hardened; it felt as if he had a big thick cigar in each ear. The emergency vet said that apparently, he had been standing in his urine in a cage for some time because his paws were stained yellow. His coat and skin smelled awful and his skin was full of scabs. After about two hours at the vet, they washed him and shaved and cleaned his face and ears, and dispensed one mg of Azium and 100 mg Polyflux, Clavamox 125 mg. for fourteen days, Panalog ointment fifteen ml, Triple antibiotic OO. We were told that one of the technicians was so disheartened at seeing his condition, she cried.

A couple of days later, we took him to our vet where they kept him for observation for the day. He has cataracts and his eyes still discharge gunk. Our vet told us he has a heart murmur and that we need to take him to a cardiologist. She said he also needs an ophthalmologic workup and a dermatological consult. A few days later, we brought him in for a follow-up check-up and he seemed to be progressing. A few days following that, he started limping, refusing to step on his left front paw. The vet dispensed Synotic w/Linc/Banamin and Baytril 68 mg. He’s now walking better, but his paw is still swollen.

Dudley’s recommended course of treatment is a cardiac workup due to heart murmur; ophthalmic workup due to eye discharge, cornea problems, and blindness; and dermatology consult due to pododermatitis, seborrheaoleosa, alopecia. allergies.

Please accept and extend to the board of WestieMed, our heartfelt gratitude for the financial aid that made Dudley’s medical rehabilitation possible. I honestly don’t know what we would have done with this little stray Westie, had you not been there for him and us.

Each day Dudley gets better and better… and feistier. This past Sunday, he made his debut at a neighborhood sixty-family garage sale. He was quite the celebrity as he amazed neighbors who had seen him on that fateful day when he landed in our alley. They were astounded at how much healthier he appeared. When garage sale customers inquired if Dudley was available, they were told in no uncertain terms that they could take husband Tom, but never Dudley!

While Dudley continues to need work on his ears, eyes, paws, allergies, and teeth, we’re thrilled with the progress he has made. His Westie spirit and determination are inspirational.

We cannot thank you enough for your generosity and compassion.

Just wanted to send a new “after” picture of Dudley to show the improvement from his “before” picture taken in March. Again, thank you and WestieMed for all your amazing help.

Dudley has definitely settled in with us and has managed to successfully train both Tom and me.

We cannot thank all of you enough at WestieMed for your financial and emotional support in helping Dudley move forward. I don’t know what we would have done had you not been there for him.

On the health front, Dudley’s eyes are coming along. We administer three meds three times a day. His ears are not faring as well in that the cartilage continues to harden. We’re hoping that he won’t need to undergo surgery, but it looks likely. We’ll learn the verdict this Saturday from his dermatologist Dr. Karen Kuhl.

On the behavioral front, we went through a period when if Dudley was sitting on the bed or sofa with Linda, and Tom would enter the room he would snarl and lunge at Tom. This protective (or so we guessed) behavior made us think he might have spent time in bed with a sick or dying person prior to his abandonment. When we realize how little he can see and hear, it’s amazing he doesn’t snarl more to changes in his environment. The good news is that he no longer snarls at Tom.

Our only challenge is his bladder control. He can’t seem to go for any length of time without urinating. During the day, we manage to get him out frequently. At night it’s a different story. We would really appreciate any advice you might be able too offer. We take him out between 11.00 and 11:30 p.m. and then he happily saunters into his crate next to our bed. He awakens at 4:00 a.m. and howls non-stop to go out. This incites our other dog Baka who is crated on the other side of our bed. They then make it a ceaseless doggy duet. If we don’t crate Dudley at night, we have several accidents. Any suggestions?

Please know how much we treasure all that you’ve done to help us.

It is approaching a year since Dudley came into our lives. We will celebrate his arrival–aka birthday–on March 17. Thanks to WestieMed, he is healthy and thriving.

Although his eyes and ears still operate at about 50%, he has learned to sit and stay. His vocabulary includes “dinner,” “go get Daddy,” “let’s go out,” “it’s time for bed,” and “do you want to go for a walk?”

Once again, we can’t thank you enough at WestieMed for helping Dudley and us.

All our best, Linda and Tom Leahy Dudley and Baka