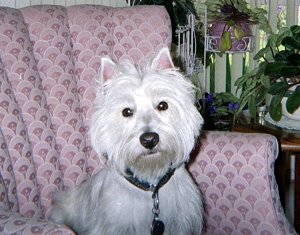 Jake is a two-year-old male Westie with Juvenile Cataracts. He was bred by a backyard breeder and purchased as a puppy by a single woman. However, the owner’s health made it impossible for her to care him properly. She surrendered him to the Westie Rescue program of the West Highland White Terrier Club of California.

The rescue volunteer stated that Jake was the sweetest Westie she had ever seen. She took Jake to a veterinary ophthalmologist to determine if anything could be done for his complete blindness. Jake contentedly sat on her lap at the doctor’s office, he was friendly with other dogs and cats and he let the doctor and staff do the evaluation exam without a squirm or a cry. The ophthalmologist stated Jacob’s vision could be restored by removing the cataracts. Jake has no other health problems and his prognosis for a long and wonderful life was excellent.

Soon foster care was arranged for Jake. He was fostered by a retired schoolteacher who was committed to take care of him before, during, and after the surgery to restore his vision. The surgery was scheduled for July 30, 2002.

After Jake’s surgery we received the following message: “Jake’s surgery went well. They were able to do both eyes. He is being treated with oral medication and several different eye drops. The day after surgery they tested Jake on the obstacle course and he did extremely well, both in bright and dim light. Everyone at the doctor’s office thinks he’s a wonderful dog. He’s so patient when they examine him. He never whimpers, growls or tries to squirm off the table. When I take him out to the yard he seems quite amazed by the world he’s able to see.”

WestieMed is pleased to help defray the medical costs to restore Jake’s vision.

We took Jake to Spokane yesterday for his three week check and he’s doing GREAT!! The doctor is very pleased with his progress and he’s the best patient they’ve ever had. Everyone in the office loves him. His eyes are clear, bright and shiny now and he can run around the yard and play and doesn’t run into things. I’m so happy for him. He’s such a wonderful companion. I want to thank you (WHWTCC Westie Rescue) so much for placing him with me and a HUGE THANK YOU to WestieMed for financing his surgery.