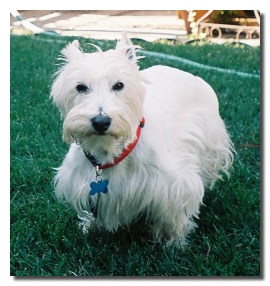 We had a wonderful Westie girl named Kelsey for fifteen years. When she died we explored the idea of a rescue dog. We applied for a couple of dogs through Westie Rescue Missouri but did not hear anything. We eventually got another girl (Dixie) from a breeder.

Just after Dixie had her first birthday, WRM contacted us with the news that there was a three-year-old male named Tucker ready for adoption. His original owner died and he was placed with a shelter. The shelter then adopted him to a family with two small children. Well, we know what happens with Westies and small children… yes he bit them and he was surrendered to Westie Rescue Missouri. WRM placed him in a foster home. On the 4th of July weekend, we arranged to meet the foster family halfway and brought Tucker home.

Tucker was very quiet and slept most of the way home. Upon arrival home, he took an immediate dislike to Dixie. He snapped at her and growled. He was very un-Westie-like. He did not run, jump, bark or play with toys. He had difficulty getting up from a prone position. Our first thought was that he was a very old dog. Not the three-year-old we heard about. We contacted Angie at WRM and she indicated that this was the information given to them and the foster family did not notice anything amiss.

We made an appointment with our vet for a follow-up. He did not think he was old and could find nothing wrong on the surface, so took some x-rays. The news was not good. Tucker had severe hip dysplasia in both hips. No wonder he was crabby, his poor little bones were so misshapen and arthritic, it hurt just to look at them. We were referred to a specialist for an appointment the next week. I asked the vet for alternatives and he stated that some people choose euthanasia.

We again contacted Angie at WRM and they offered to take Tucker back, but we did not think another placement would do him any good. She also told us about WestieMed and what a wonderful organization it is.

We took Tucker to Veterinary Specialty Center in Buffalo Grove, IL. Dr. Claude Gendreau examined Tucker and stated he thought surgery was the only option. He could perform it that very day. We decided to go ahead as we had become too attached to Tucker to put him down or put off the inevitable. That evening Tucker had a Femoral Head Ostectomy on his right hip. The surgery went well and the Dr. indicated his prognosis was good and maybe the left hip would not have to be operated on if he heals well enough to compensate with his right. The procedure has been very successful in small breeds.

We thought it was too late to apply for aid as we went ahead with the surgery. Angie from WRM put us in touch with Bette from WestieMed and she assured us it was not too late. She helped with the application procedure and we just got the terrific news that the board of directors had approved his expenses.

We cannot begin to thank the generosity of WestieMed and the donors that made it possible to defray the huge expense incurred.

Tucker looks a little sad in his picture but is improving daily. He and Dixie are pals now and roll around together. He is even starting to play with some toys. It will be a long recovery but we think he is going to be every bit the happy Westie.

Thank you so much for the overwhelming generosity,

Tucker is doing very well. He is a happy dog. We found out that he is much older than we were told (at least ten) and has the beginning of kidney disease. In spite of all that (he is on prescription food and being monitored) he has dramatically changed from the sad little rescue we picked up last July.

It has been a long road for Tucker, who knows what happened before we adopted him, but he has healed well after the surgery. He loves to go for walks, he loves to eat, and even loves his veggies for treats as traditional biscuits are out because of kidney disease. He has several beds around the house where he settles in as he doesn’t leave our side. He and his sister Dixie play often and he now initiates play which never happened before.

Thank you Westie Med for helping to make Tucker the happy dog he is. The generosity is still overwhelming.

To all the kind people at Westie Med:

It is with a heavy heart that I must give you a sad update on Tucker. Tucker suddenly stopped eating one day in September but we weren’t immediately alarmed as we had just changed his food to a different prescription kidney diet. He would accept food from my hand and would occasionally eat treats. He stopped playing with his sister and then began vomiting and diarrhea. We took him to the vet and they kept him for tests as he had a high fever and all his blood tests were way off. We took him home the next day pending the results of further tests. The news was not good. He had pancreatic cancer. He was hardly able to stand and was degenerating quickly. We decided that poor Tucker had enough and made the difficult decision to put him down. We stayed with him and stroked him and told him how much he was loved.

WestieMed helped make the last year of his life the best one. Before the illness he had recovered from the surgery so well he was acting like a typical silly Westie, playing, loving his walks, meals, and enjoying tummy rubs. We really fell hard for Tucker in the short time we knew him and miss him terribly.

Thank you for giving dogs like Tucker a chance at happiness.