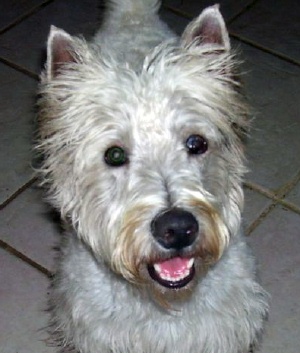 Westley was left at a vet’s office for boarding, and when the pick-up time arrives, the owner refused to retrieve him, saying he did not want Westley anymore because he was blind.  The vet waited ten more days, and still, the owner did not show, so the vet contacted Westie Rescue of Austin to take him into our program.

While at the vet’s office, Westley did receive a full panel of vaccines, including rabies, and he was neutered.  A grade 3 heart murmur was detected, so when we picked him up we were advised of this added complication, besides the bad eye.

Westley had suffered a serious eye injury to his left eye some time ago when he was a wee pup.  Our eye specialist examined him and said prior “flap” surgery had been done, but it had not been successful, and Westley had no vision at all in that eye.  But his other eye was perfect and he had the full vision with it.  The specialist said the best option was to remove the damaged eye, as glaucoma was developing due to increased ocular pressure and pain was occurring.

We also consulted with a doggie cardiologist, the one who monitored our two previous open-heart patients, and she could not detect the heart murmur, even with a sonogram.  She did say that sometimes the onslaught of the vaccines can induce a transitory murmur and that must have been what happened in Westley’s case.

Westley had his eye removed and the socket stitched closed on Wed. 12/10/08.  He gets the stitches out on 12/19/08 and should be fine after that, with no residual problems.  Since coming back to his foster home after the surgery, you would never know he had anything wrong with him.  He is an active one yr. old Westie, into everything, and loving life in general.

Westley should be very adoptable, once his hair grows back to cover the closed eye.  We are very grateful that WestieMed agreed to help with the costs of surgery. Westley now has a chance for a long and healthy life ahead of him.  Thank you, WestieMed.

Following is a picture of Westley after his eye surgery.  He does look a bit lopsided, but once his hair grows back, we will send more pictures and an update.

Westley got adopted by a wonderful family, with two children who love him and he loves them.  The father was especially attracted to Westley because as a child he too had lost the vision in one eye, and he empathized with Westley.

It was definitely a match made in heaven for the father and dog… another happy ending!