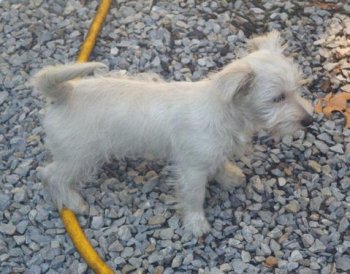 Sugar, a darling westie mix, was rescued at the tender young age of five months. Her breeders were unable to sell her through a newspaper ad and thus decided they would simply keep her and breed her, like her mother to make more westie-mix puppies. Rather than allow her to become a backyard breeder producer of yet more unwanted mixed-breed puppies, I managed to convince them to surrender her to me.

Upon getting Sugar home, we discovered she had a number of parasites, and needed several vet visits and a few rounds of medication to become healthy, which we are grateful to WestieMed for providing.  After a few weeks of treatment, she is looking much better and really starting to put on weight, and is now healthy enough to be spayed soon.

Sugar was lucky to be saved from life as an overbred, sickly dog with little quality of life, producing litter after litter in hopes of earning her owners a few extra dollars. This is how the pounds end up full of dogs who started out as “cute puppies” and then when the novelty wears off, they end up unwanted and neglected, ultimately populating the pounds where they are often euthanized. It is critical that every one of us do what we can to help break that cycle whenever possible.