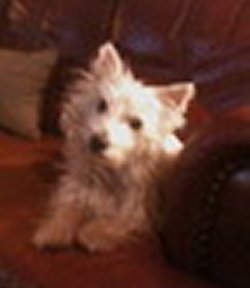 Little Miss Millie was as sick as she was tiny and feisty when Westie Rescue Indiana (WRI) managed to get her out of a Kentucky shelter in February. It wasn’t easy…

Although she had a wracking cough and was obviously unwell when her owner brought to the shelter on February 1st, the shelter refused to release her to rescue, preferring to try to adopt her themselves. So Millie languished in the shelter for two weeks as her condition deteriorated. Finally, the shelter sent her to one of their foster homes where she could get be better cared for, but at this point, Millie was listless and running a high fever. Still, two more days passed before a call was made to a WRI volunteer, asking if we would now take Millie.

Once in WRI’s care, Millie was rushed to the vet, where she was kept in isolation for nine days. A battery of tests revealed that she suffered from the effects of pneumonia, a chronic cough and an extremely high white blood count stemming from an infection that had been left untreated for too long. The vet did not expect her to make it, but by the end of February Millie was well enough to go “home” with her foster mom, who had visited her daily at the vet.

The month of March was spent in a series of return visits to the vet for more tests to monitor her white blood count and constant adjustments to her medications, and Millie continued to improve. She started eating well and gained two pounds in short order, bulking all the way up to twelve pounds by early April.

Because her lungs had been scarred from pneumonia that had been too-long left untreated, Millie would always have a cough, but she was healthy now and ready to find a home of her own. But this wasn’t easy either…

As Millie began to feel better, her feistiness emerged in tandem, and she proved to be one conflicted girl — begging to be picked up and then snarling, growling and snapping when anyone tried. Clearly, it would take someone experienced with terriers to handle this seven-year-old diva.

After one failed placement, where Millie didn’t mesh with an older male Westie already in residence, she finally found her forever home in late May. It took almost four long months of care and patience to save this little girl, but to look at Millie now in the arms of her new mom, no one can doubt that it was all worth it.

Thank you, WestieMed, for helping us help Millie!