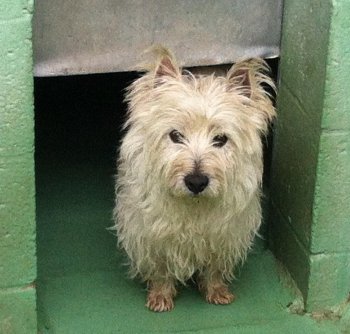 All Westies at WROC are special, but Gus is a very lucky boy that had a lot of people rooting for him.  This sweet boy, that we believe to be approximately five years old was picked up by Animal Control as a stray and taken to a high kill shelter.   Not knowing he was injured, Gus sat in the shelter for several days, sharing a kennel with thirteen other dogs.  Our friends at S.A.F.E. Animal Rescue took him home, fed him a warm meal, put him on antibiotics and tucked him in safely for the night in preparation for his long drive to WROC the next day where he was taken to our vet immediately.  X-rays indicated a ruptured abdominal wall that allowed his intestines and fatty tissue normally found behind the muscles in the abdomen to push through, most likely sustained from being hit by a car.  Gus underwent emergency surgery and while he was under anesthesia, his blood pressure was dangerously dropping.  His surgical team had to close him up quickly in order to save his life.  Gus needed time to get stronger, and a week later, he underwent a second surgery to finish repairing all of his internal injuries.  Gus was released from the hospital a week later and is now resting comfortably.  Throughout his ordeal, one would have never known Gus was hurting.  This brave little dog will make a full recovery.   Gus is a very happy boy that enjoys life and is looking forward to finding his forever home.

Thank you WestieMed for assisting with Gus’ expensive veterinarian bills.  We are so appreciative of all you do!

We are so pleased to let you know that Gus was adopted by a wonderful adopter that had been following Gus’ story from the very beginning.

Gus made a full recovery and is now enjoying a wonderful new life filled with family outings, lots of walks, vacations and is one very spoiled Westie.

Thank you WestieMed for your assistance with our very sweet boy and for your generosity with countless other deserving Westies.

It has been six months since Gus was found at a high kill shelter suffering from life-threatening injuries after being hit by a car. After two surgeries, rehabilitation in foster care and being officially adopted in March, Gus continues to thrive! His new person dotes on him and there isn’t a want or need that goes unfulfilled. Gus travels quite a bit between Southern California and San Francisco to visit family and friends and it was recently discovered that Gus is a water dog! The first time he saw a pool, he walked around it for about 1/2 hour and then decided to jump in at the steps. His family cheered him on as he swam back and forth and it was quite obvious that Gus was very pleased with himself. He loves to chase squirrels up trees, he gets home-cooked meals, absolutely loves his toys and he even gets blueberry facials with his regular grooming every six weeks. He is sweet, gentle, happy and his personality just lights up a room! But the best part of Gus’ journey is that he is safe and he is living an incredible life!