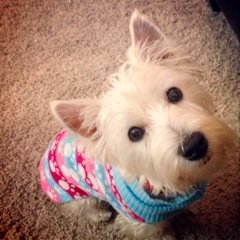 Daisy was a tiny ten-month-old Westie who was in a lot of pain. She had fractured her leg – how we don’t know. Her owner eventually took her to a vet to see about repairing the complicated break, but could not afford the surgery. So Daisy’s leg was splinted in hopes that it would heal on its own. However, without the surgery, her leg had begun to heal in a way that would have caused Daisy a lifetime of pain and impaired mobility.

Not long after, Daisy found herself scared and alone in a shelter in Evansville, IN, where her owner had dropped her off to become somebody else’s concern. Fortunately for Daisy, one of the shelter’s caring employees was concerned enough about this little pup to contact Westie Rescue Indiana (WRI) seeking help.

A WRI volunteer from western Kentucky met the shelter worker the very next day and immediately took Daisy to her vet in Owensboro, KY. Ultrasounds and X-rays were taken and showed the fracture to be far more extensive and complicated than originally thought. So Daisy was referred to an orthopedic specialist in Louisville where she subsequently underwent extensive surgery.

Daisy’s vet bills soon climbed into the thousands, but one look into her trusting eyes and there could be no question that whatever had to be done for her would be done. This sweet little pup was a trooper, making friends and admirers wherever she went, doing all that was asked of her without complaint and always, always bestowing kisses!

Our dedicated WRI volunteer devoted much of her life over the next several months to making sure Daisy got the loving care she required. She said that the most difficult part of the recovery process was keeping this naturally energetic Westie pup quiet enough to properly heal.

After several weeks of enforced confinement, Daisy was pronounced well enough to begin a course of water and physical therapy necessary to ensure she would be able to put weight on the leg and eventually walk without a limp.

Thanks to our dedicated volunteers, to a concerned shelter worker and some very accomplished vet and PT specialists, Daisy now has a full and happy life ahead of her. And thanks to help from WestieMed, Daisy’s bills can be paid in full without jeopardizing Westie Rescue Indiana’s ability to help the next Westie in need who comes our way!

Daisy has adjusted quite well to her life as a very spoiled member of our family.  She loves to cuddle, sleep on the bed, and run in the backyard.  She is very much a tom-boy and bosses around her brother Westies Elvis and Preston.

Now, she even has a job on her brother’s website PrestonSpeaks.com where she has become a fan favorite and an internet celebrity in her own right.  She has even started traveling to pet expos and a few months ago she flew on an airplane for the first time when she went to the Dallas Pet Expo.

She has recovered very well from her extensive leg surgery back in 2013 which involved several months of rehabilitation.  Unfortunately, last fall, the pin in her leg started to shift and she had to have a second surgery to remove the pin.

After another long month of crate rest, she made a complete recovery and the vets say she shouldn’t have any more problems in the future.  Since then, she has been back to chasing her brothers in the backyard.

Daisy has been a wonderful addition to our family and we can’t imagine our house without our “Daisy May”!

Thanks, WestieMed for funding the surgery that allowed our little girl to walk, run again, and lead a normal life!