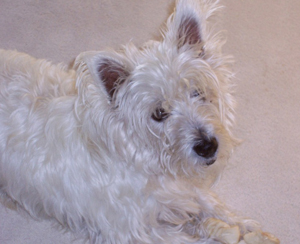 Albert is a 12-year old Westie boy who was surrendered to our Westie Rescue of Northern California by his lifelong owners who are divorcing. Both moved to apartments where they cannot have a dog and want him to be in a home with a yard and the opportunity to have proper care and attention. He is a diabetic Westie who is totally blind from cataracts and his hearing is also impaired.

He is being fostered by a retired RN who practiced as an Emergency Room nurse her entire career in Napa, California. I had trouble finding a Foster who was comfortable giving Albert insulin shots and managing his loss of sight. Albert is quite content to be a laid back boy and it is my hope that she requests to adopt him once we have taken care of his cataracts.

I picked him up in Milpitas, CA and made a stop at Veterinary Vision in San Francisco en route to Napa. Dr. Cynthia Cook has performed cataract surgery on one of my own Westies and also for one of my rescues, Darby, who received a grant from WestieMed. She gives us a 20% discount and strives to come in at the low end of her estimate for surgery. Our Rescue will pay the remaining costs of his surgery after the WestieMed grant is sent to her. Dr. Cook has confirmed that he is a good candidate for surgery. He is having his pre-op blood work and vet exam on May 11 and I am going to try to schedule his surgery for May 20th.

Albert is a very sweet little guy. He has another dog to play with in his Foster home and has become fast friends with a Golden Retriever named Connor. He learned his way around the house fairly quickly and is favorite spot is on the sofa with the Foster. He also naps in the sun on her deck and is able to ask to go outside after only a few days. He is affectionate and tries to play when he is on the floor. Here is a quote from the last update from the Foster: “If Albee had his vision again he would be a playful lil guy, likes to lay on his side next to you and have his tummy rubbed.” It will be wonderful to observe what he thinks when he is able to see after three years being blind.

Our thanks and Albert’s gratitude to all of the people at WestieMed for giving him the gift of sight with your funding of his surgery.

We lost our little Albert to congestive heart failure last weekend. We are so sad. He was the best boy and at least had his eyesight for his last two years. It hurts to lose these rescues as much as if they were my own dogs.

Thanks WestieMed for your support of Albert and our other rescues.