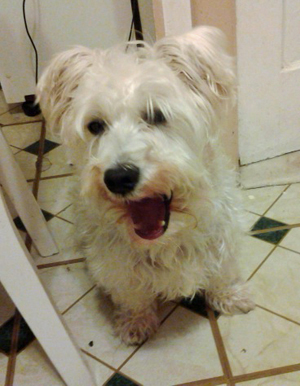 The idea of having a dog in our house came from my children. They often asked me when I would decide to get them a dog. That’s when I chose to check the Animal Care & Control of NYC located nearby because there are so many animals waiting for homes in shelters throughout the country that I felt the need to help save the life of one of these dogs who are left there heartlessly.

When I saw Ben up for adoption at the shelter’s website, it was love at first sight.

It was an early Saturday morning and I just could not wait to meet him. By reading his description, I said to myself he was the right fit for my kids and I was not wrong at all. We have loved Ben from day one, he is just a sweetheart, and we are immensely happy to have him with us.

His behavior is remarkable, it truly feels as if we have known Ben forever. I cannot understand why Ben’s previous owner left him at the shelter, as I was told by the staff that he just did not want to deal with Ben anymore. Knowing this just breaks my heart because Ben is adorable not only with us but also with strangers, who are often attracted by his looks and playful behavior.

Ben is a healthy dog just like I was told at the shelter, but I was not so sure about that because Ben was constantly scratching, where he had patches of hair loss, which turned into cuts in a matter of days.

Since this did not seem to heal, I took Ben to the vet so that he can be treated. The bill was so unexpectedly high that I felt awful for not having all the money available to treat him. I just paid for what I could at the moment. I started to resent myself for carelessly adopting a dog when I was not financially stable to care for one. I went and I got what the vet suggested at the pet store later on. But weeks later the skin condition started all over again looking worse than before. I was afraid of going back to the vet again, to pay for a treatment that did not seem to help, but I could not leave my dog like that either.

I reached out to WestieMed for aid, and to my surprise, they approved my request. Thanks to them, Ben will be able to receive the care he needs.

Ben has been doing great, attached is a picture of him taken today.

Ben’s health is good, other than the allergies he gets. A few weeks ago I had to take him to the vet which gave him a shot for the itching, and antibiotics for the irritation on his skin. the treatment worked and that same day he stops feeling itchy. I am glad to have found a vet that is affordable and really understand Ben’s allergies condition, I also have a Carecredit card for emergencies.

Ben is happy with us, we love him so much and even the tenants want to take him for walks from time to time, he is truly adorable.

Thank you so much for asking about Ben, and thanks to WestieMed for the financial support given to Ben when we most needed it.