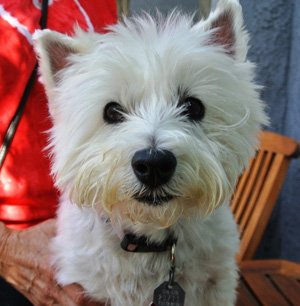 When Callie came to rescue from a San Diego shelter, we thought she had the typical skin issues that we deal with often in rescue and figured she would be fixed up in no time.   Once we took care of her skin issues, she was ready to be moved to a foster home while we interviewed applicants.  During her time in her new foster home, it was noticed that she was again losing some hair and was drinking a lot of water.   We brought Callie back to our vet where we had a complete blood count (CBC), blood chemistry panel and urinalysis performed and because we noticed her belly was larger than normal, we had her tested for Cushings Disease.  Low and behold, Callie did have Cushings.  Knowing that it would be very difficult to adopt a dog with Cushings, Callie’s foster Mom agreed to foster Callie for as long as it took to find her an appropriate home.

Several months went by with little interest in our girl but we remained hopeful.   Shortly thereafter, another issue popped up with this little girl that just could not catch a break.  We had been battling her chronic ear infections since she came to rescue, but it was painfully obvious that something drastic needed to be done.   Back to the vet, we went and during her exam, it was suggested we seek a second opinion with a specialist.  Our fears were confirmed that Callie would need TECA surgery (Total Ear Canal Ablation).  Poor Callie was stuck in a cycle of inflammation, infection, and fibrosis and the pain was just too much to bear. Callie had her first TECA surgery in June of 2014.

Callie’s foster Mom was amazing and brought Callie through rehab beautifully.  With all these issues stacked against Callie, we knew finding her a forever home was nearly impossible.  So we approached her foster Mom and told her we would take her into our forever foster program once a home opened up.  Callie’s Mom literally made our hearts swell when she said that she would officially adopt Callie.  Knowing that she would most likely need another TECA surgery down the line, we agreed to a provisional adoption should Callie need another surgery.

Everything was smooth for quite some time, but when her second surgery approached, we were not surprised.  We were grateful that her foster Mom was willing to get her through this next hurdle with the love and care she has received since she arrived at WROC.  What is even more amazing is how sweet and gentle Callie has remained during all of this.  She is a smart girl and a very good patient.  We do believe she knows we are here to help.

This is an expensive surgery and Callie’s costs since coming into our program have been astronomical.  Thanks to WestieMed, Callie just had her second TECA surgery.  So many Westies are abandoned to shelters due to their medical issues.  WestieMed has helped so many Westies get the help they so desperately need.

After a couple of setbacks and more surgery, this little girl has made an astounding recovery.

Her Mom, Kim, swears that Callie is able to hear despite the surgery on both ears.

Callie is happy and well-loved by Mom Kim and brother Mini-Cooper!!

Callie is thriving with Kim & Mini-Cooper.

She requires regular medical care which her Mom takes great care of.

The picture is from WROC’s 2016 Photoshoot.

Thank you very much for helping this adorable Westie.

We are forever grateful.