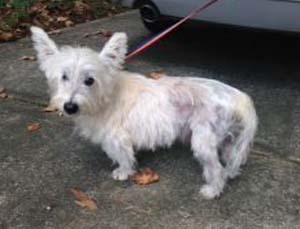 Eight-year-old Samson was walked into his vet’s office one day but not for a regular appointment. His owners asked the vet to have the sweet boy put down because they could not take care of him. One of Samson’s eyes was malformed from birth but that had never slowed him down. When he arrived at the vet clinic that day, he had horrible skin and hair loss, fleas, intestinal parasites, bad hips, and a severe heartworm infestation.

The vet asked Samson’s owners to release him to her care and promptly reached out to Westie & Scottie Rescue Houston (WSRH) for help. The vet treated Samson’s intestinal parasites and started addressing his condition with bloodwork and medications prior to sending him to WSRH. He was in a small town about four hours from our primary location so several volunteers offered to do a relay to transport him and one of our experienced fosters who has taken care of many dogs with heartworms took him into her home.

Samson was taken in to see our vets at Bear Branch Animal Hospital where he was examined by Dr. Kim Hilscher who confirmed he was heartworm positive and assessed the condition of his heart, lungs, and hips with x-rays. It was determined that his bad hips were due to fused vertebrae and the vet recommended pain management for the time. Due to his poor condition, we decided to work on Samson’s general health prior to starting a split treatment to kill the heartworms. After a month of good quality food, medicated baths, and a couple of rounds of doxycycline, Samson went in for his first injection of Immiticide, after which his activities were restricted while the medication did the work of killing heartworms. Vet appointments at two weeks and then four weeks later confirmed he was doing fine, so then Samson was given the full treatment of two Immiticide injections and another month of restrictions.

Things went well for Samson and he received clearance from the vet for successful heartworm treatment so his next job was to find a forever home. While waiting for the right person to take notice, Samson took ill quite suddenly and was rushed to the emergency vet for vomiting and passing blood. Samson was admitted to the hospital where he received fluids and medication to stabilize him and x-rays werer taken to help determine the cause of his distress. Samson spent the next three days on fluids at Bear Branch until he was back to his normal self and returned to his foster home. There was no definitive cause found for this issue but Samson has not had a recurrence.

The next step for Samson is to meet approved adopters who are interested in adding him to their family. We are very grateful to WestieMed for help in treating Samson and making it possible for him to get healthy and find a forever family of his own.

We are ever grateful to WestieMed for helping us help Samson get well and find his furever home.

Not long after recovering from the emergency room visit, Sam caught the eyes and hearts of a wonderful family of terrier people and it was mutual love at first sight when they met. Thankfully he had finished all his restrictions before meeting his new furry siblings, especially BFF Colleen, an adventuresome Scottie who joins Sam each day running, playing, and watching for birdies. All the running (and digging!) has helped strengthen Sam’s legs and improve his balance. Sam’s furever family loves him very much, stating the highlight of the day is each evening before bedtime when daddy gets on the floor to play and Sam talks to him.

Thank you, WestieMed, for helping us give Sam a well-deserved happily furever after!