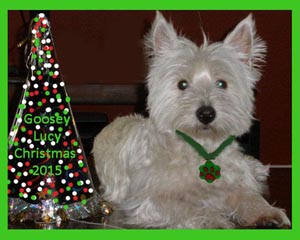 I had always wanted a dog but my mother was allergic to animals. When I was only seven, my cousin had won a puppy as a prize at a Coney Island carnival game. He gave it to us. The puppy was in such bad shape we called him Underdog. Because of the conditions, he came from, he didn’t have a chance. He lived exactly one month and died of distemper. As a little girl, I was crushed.

The vet said we had to wait six months for the virus to die in our house and suggested we look into a West Highland White. We drove to the end of Long Island. The breeder would not let us touch the dog except through a towel. The puppy was female, and for some reason, my dad wanted a male, but he went back in, bought the female puppy. My mom immediately said we should name her after the Queen, and Lizzie I became the center of my world.

There has been a Lizzie II and Lizzie III over the course of my lifetime. Each “Queen” reigned with her own unique and cherished quirky attitudes. And NONE were told they were too short or little for their oversized, commanding personalities. All would perch on the top of a sofa or surface watching, protecting and surveying their kingdoms.

In Florida, Lizzie III was joined by a rescued mixed breed with only hours to live. She intuitively knew the rescued dog needed to be watch and cared for. When Lizzie III passed away, I still had my rescue and fostered other rescues, but I always yearned for another Westie.

I had become disabled, and I could no longer afford to go to a breeder, and even the Westie mixes were adopted out so quickly. I had accepted the idea that my Westie days were over.

I kept doing my general rescue work and left it in God’s hands.

One day, for no apparent reason, and for the very first time, I browsed the pet ads on Craig’s List. Having experienced the heartbreak of Underdog, I knew I would never go to some backyard, or worse, puppy milled Westie. I was thinking, why was I looking and stirring up my feelings of heartbreak again.

And then, posted under the wrong category, was an adoption ad for a youngish female Westie, found abandoned in a field. Unfortunately, leaving a dog in a field is not uncommon around here when people do not want their pets anymore. The woman who found her had checked for owners, but also knew to leave a dog in a field, was a sign that it was intentional.

She had a three and half-year-old daughter, who really liked the dog, but soon after finding her, she had to move to an apartment that did not allow pets. Her daughter was heartbroken. She wanted to find a good home but needed one quickly. She did not want to drop the dog off at a shelter.

I called her. So did apparently half of Tampa Bay. She was annoyed because I called her while in the shower and abruptly ended the call. I was discouraged and let it go.

Three days later, I gave her another call without any expectations. She was nicer, told me about how she found her, her daughter’s heartbreak, and the immediacy of the situation. Having fostered before, I offered to foster her dog and she could bring her daughter over to visit and play with the dog whenever she liked. I also told her that if her living situation changed, she could have her dog back. It seemed to be a very workable answer for everyone.

When Lucy showed up, my heart melted. She was a little small, underweight, confused but completely a Westie! She charged into my house, past me, my other dog, and her temporary owner to get the layout and discover the nooks and crannies. To my joy and surprise, she did not have skin problems! They left and “Sweetie” became Lucy, and Lucy was in charge! The women brought over a daughter whenever she mentioned “Sweetie” and this went on for a while.

Lucy was not spayed, had no history or exact age. She had no training and was way too old not to have been potty trained. After more than a year, I could not imagine returning her, but I knew I would as agreed. We have some low-cost clinics and services here and I had her spayed, took care of her shots and put her on heartworm meds as it is so prevalent in Florida. As her foster mom, I could get many of these services at low to no cost.

Around Christmas, I learned that mom and daughter were moving out of state and that Sweetie turned Lucy had her forever home! I could not imagine sleeping without that little nose poking out of the pillows above my head.

In Florida, flea and vermin are out and about early. I knew I had to get her Trifexis for fleas and heartworm and other parasites, but I still have another rescue and the costs were out of my ability to pay. I was not letting her go out for the past few weeks, because the situation is so bad in Florida. Now we have Zika. Who knows if that will affect pets?

I tried calling manufacturers of pet medications, and the groups that helped with vaccinations, but these medications were never included. By chance I found WestieMed. I hated not letting Lucy out but I could not risk it. Our flea season started about 6 weeks ago. Then I got a letter from WestieMed that I was approved! I am so appreciative and so happy that Lucy will be able to get out to the Dog Park, Dog Beach and run around without risking her health. And now all of us can enjoy the sunshine together!