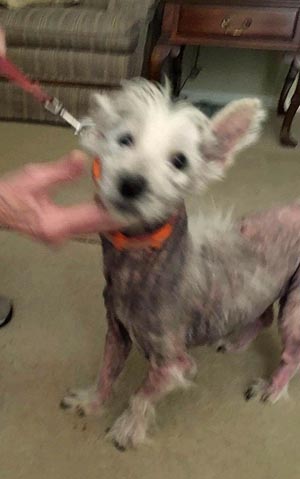 Addie was a very malnourished 11 lbs and almost hairless with lesions all over her skin. She had been living in horrible conditions for the entirety of her first six years of life. Having been fed table scraps with little to no outside access and no clean indoor space. Her foster mom tells us that Addie had almost no muscle mass and could not even jump onto the couch. She was afraid of not getting another meal. It took endless love and patience from her foster family for eighteen months before they even considered that she might be ready for adoption.

That’s when we discovered her on Petfinder.com  fell right in love! We have a fourteen and half year old Scottie who was missing his former Westie friend, Fiona (a prior WestieMed grantee) who passed in July 2017.  Addie’s foster mom Sandy brought her over to our house. Our Scottie and Addie got along right away and Addie stole our hearts.

On our first visit to the doctor with Addie in November, we were advised that she had skin and ear infections. We are still treating those. We’ve sent out for cultures on both to be able to treat those in a more targeted fashion. We tested for low Thyroid, and Addison’s which came back negative, but with very high chances of Cushing’s. We’re still waiting for those results.

We know she may not grow back much, if any, of her hair.  We just want to make sure she gets into a good place where her skin and ears are no longer infected and causing her pain.

She’s such a Westie girl! She loves to chase and dig after anything in her yard. She has a blast jumping onto the boulders in our backyard to get a better view of said varmints and she loves to torture her brother Jack every chance she can!

Thanks to all involved in her rescue and for those whose support today allow us to get her the care she deserves.

The first picture of Addie was taken the day she was surrendered. The photo of her with muddy paws was taken last Sunday.

Addie is doing well. She does have Cushings, we are beginning treatment for that as well as getting her started on allergy drops.

We look forward to being able to give back to WestieMed.

Firstly, we want to thank you all again for giving us a big help in Addie’s continued medical treatment.

Months ago, Addie’s skin was dry, blotchy, flaky, crusty, etc. and it caused her to do a lot of scratching and chewing.  With the combination of medicines, medicated baths, and diet, within the last month, her exposed skin has finally become soft and smooth, and she only has a couple of hot spots on her front legs.  It’s a huge improvement!  We know that she will most likely never grow hair back, but that’s okay with us.  We think she’s adorable, and as long as she’s comfortable and happy, we’re happy.  Plus, it’s an excuse to keep her covered in plaid in cooler weather! For the summer she has on a UPF t-shirt so she won’t get burned.

Addie was diagnosed with Cushing’s, for this, she is on Vetoryl once daily.  She has been ricocheting from skin infections to ear infections, but they seem to be subsiding.  She takes two Apoquel a day, and one Atopica once daily.   She went through blood allergy testing (her skin could not handle the skin testing) at Blue Pearl Veterinary Specialists and is on a customized a serum twice a day.  She’s on a wheat gluten-free diet and we add salmon oil to her food.  She gets weekly double-medicated-shampoo baths.  And recently, it was determined that she has dry eye, so she receives two eye drops twice daily.

She lets none of the above slow her down! She is a 200% Westie girl – chasing squirrels and rabbits daily. This weekend she discovered frogs! As she starts to feel better the more open she becomes to playing with her new brother, four yr old Scottie Logan. We hope to keep her conditions under control and hopefully, more improvements will come with that.