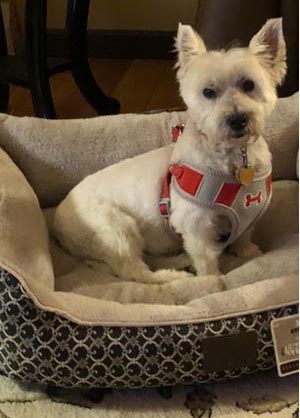 We lost our little Westie Man in December of 2017 at the age of fourteen. Our hearts were broken  We went back and forth discussing if we wanted another dog or to wait. Well after a few weeks we both decided that we had a huge void in our lives without our Little Man. Nothing beats coming home from work and having the little guy coming running over with unconditional love.

My husband started tearing up the Internet looking for another Westie to rescue as we had with Westie. Yes, our little Westie was named Westie by his previous owner. In the middle of January, my husband came across Bella which was in a Rescue in New Bedford and had been surrendered by her elderly owner. The Rescue was nice enough to keep her for us as we had a trip planned in early February. The day after we got home, we rushed off to pick up our new little lady, Bella. When we picked her up she had this awful cough which we were told was being treated with medicine and she would have to be on it for life. This cough was so horrible that we called our Vet who took her two days later. We were also told by the Rescue that he felt she had been neglected and it was apparent by her not being groomed.

Our Vet thought that it was probably Kennel Cough and put her on a round of Antibiotics. After the round of medicine, it appeared that the cough had stopped and that we were out of the woods. Two weeks later we ended up rushing Bella into the local emergency hospital with severe vomiting and diarrhea along with some shivering. I became very concerned as she was also lethargic and just seemed to be slipping very quickly. Even after only four weeks, this little girl had already grabbed my heart.

After three days in the hospital, we were able to bring her home and start from scratch again. Bella came to us underweight and very timid. We had basically gone back to the start again. We went for our follow-up with our own Vet after the hospitalization and the cough was back again. Our Vet had us resume the heart meds and referred us to an internist. The Internist found after an EKG that Bella’s heart was not pumping properly and referred us to a cardiologist.

As I write our story tonight, it is after her cardiology appointment today with still some unanswered questions. At this point, Bella is being treated for Chronic Degenerative Valvular Disease with further testing ahead of us  We just want Bella to be healthy and happy. Over the last two months, Bella has become the little lovebug and just can’t get close enough to you. After just eight weeks, Bella has stolen both of our hearts and we will continue to get Bella the best treatment that we can.

Thanks to WestieMed, it will assist us to go a little further with Bella.