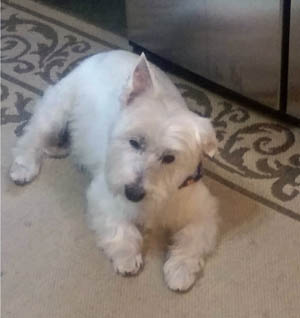 On December 16, 2017, I drove to Houston to rescue a Westie brother and sister.

We named the girl Charlotte Rose and decided to name the boy George Bailey after the film “It’s a Wonderful Life”.

I later learned that George had a severe ear infection and will need surgery. The doctor, or dog-tor, feels that has infection was neglected for a very long time, which contributed to his being deaf.

While he also doesn’t bark, he has no trouble making his needs known. He is the sweetest and most gentle dog. George has adjusted quickly and happily to his permanent home.

It’s difficult to know how much pain this infection causes him. With WestieMed’s help, George will be able to have the TECA surgery he needs.

George Bailey experienced complications from his surgery. He passed to Rainbow Bridge the day after surgery.