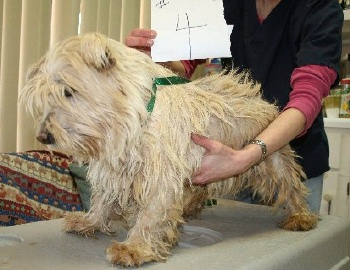 Ian spent the first five years of his life in a small pen or cage except when he was needed for breeding purposes.  He was used up and thrown away basically.  When we got him he was so terrified of humans that he got in the back of the large crate and shook in the corner.  The next morning at the vet, we literally had to turn the hard shell crate up on its end and shake him out of it.  Ian stayed at the vet for days.  He was immediately shaved and cleaned up with several baths that day.  They were able to leave a little hair around his face.  Ian had ear infections, skin infections, paw infections, worms and a urinary tract infection so severe that he was urinating blood.  He also had severe dental problems.  Ian was given several kinds of meds for his infections and other ailments.  He was given a complete dental and had some teeth extracted.  He was neutered.  Ian now has a clean bill of health.  His first real experience with freedom was when I picked him up.  I brought him home in the large hard shell crate.  We picked up the crate and took it in with him inside.  When Ian saw a human, he saw mistreatment.  He was terrified of me.  It broke my heart.  In order to gain his trust, I never reached in and snatched or forced him out, because that is what was probably done to him by his breeders.  I would open the crate door and sit down in front of it and lean up against the wall about two feet away.  I would speak softly to him and plead with him to come out.  He stood in the center of the crate and shook so violently that the wire metal door on the front of the crate jingled from his shaking.  His little eyes had a blankness to them that made me determined to find the little Westie that was in there somewhere.  Every couple of minutes, I would slowly reach my hand in and touch the top of his head.  He would cower and flinch each time.  It took me about thirty minutes to get him to come to the edge of the crate door.  He was afraid to step out because a lot of breeding dogs are punished severely forever trying to get out of their cages.  It takes some of them a long time to be able to walk through a doorway in their new homes.  I continued to touch his head and whisper to him.  I could tell in his little eyes that he wanted so desperately to try out this new thing, but his fear would not allow him to.  Finally, after petting his head and then retreating away from him over and over again, he saw that it wasn’t a trick to be able to get my hands on him and inflict some sort of pain.  He began to trust me just a tiny bit and I knew that I had won the first battle.  Each time it would take me about thirty minutes to get him to come to the edge and then I would pet him and praise him and offer him treats.  He didn’t know what a treat was.  I would put it up to his mouth and he didn’t know how to take food from my hand.  If I laid it down in front of the crate, he would gingerly step out with one front paw, eat the treat off the floor and then wait to see what I did next.  After about three days, I brought him up and introduced him to the three female Westies here.  They got along beautifully.  Ian began to watch them and do what they did.  He would see them go to the always full food bowl and eat.  After they finished, he would saunter over and look around as if to say “are you sure this is ok to do?”.  He began to eat with them, he learned how to interact with them very quickly.  It took about ten days for him to walk through the door to go out onto the deck.  Before that, I would pick him up and take him out.  He doesn’t like to be picked up just yet.  He is still afraid.  He doesn’t fuss or struggle, but his little body tenses up.  I can tell he is afraid he is going to fall.  He didn’t know what a toy was.  The first time he walked up to a tennis ball on the deck and poked it with his nose, it rolled and scared him to death.  I began to pick it up and gently roll it toward him and he would watch it and jump around so funny.  Now he rips and tears up and down the deck chasing it.  He gets it in his mouth and prances with it.   He loves to be petted. He stays right at my feet.  He now loves to wrestle and play with the other dogs and is a very loving little guy.  He is like a stocky little linebacker and solid muscle.  He has grown into a happy little Westie boy.

Ian has come a long way on his road towards understanding freedom and is a pleasure to have here.  I will miss him very much when he is adopted.  Ian is still very fragile as far as his ability to just take everyone at face value and relax and enjoy his life.  He is getting there, but not there yet.  He needs a loving owner to help him complete that journey.  Ian is a one-person dog right now and I’m sure will grow into being around groups of people, but he needs his special person to cling to in this transitional stage of his life.

One reason Ian has progressed so well is his health.  Thanks in part to WestieMed, his poor health issues were taken care of.  Ian feels great for the first time in a long time is my guess.  He is healthy and has a newfound desire to focus on learning how to be a pet and part of a family.  It is such a day to day blessing to watch his little face as he discovers life outside of a cage.  Ian is a work in progress and WestieMed is a large part of his progress.  Thank you WestieMed for helping little Ian feel well enough to march into his new life!

I wanted to let you know that Ian went to his new home today.

I think Ian and his new owner are a great match.

But I am sure going to miss him.  When I wasn’t looking, he stole my heart!

I thought you might be interested in an update on Duffy.  It’s now been seven months since Duffy moved in with me.  You would not believe the difference in this little guy.  Completely gone is the hesitant, shaking terrified little furball.  Duffy looks at each new adventure in his life with great interest and curiosity.  He is completely over his fear of men and will greet and like the hand of a strange man with relish.  He loves to ride in the car and often travels with me.  He has been to the Big Apple twice and really enjoys hotel living.  Suits him just fine.

It took several months for him to return the affection I lavished on him.  Everything changed when I had to go to Colorado and Wyoming in late August for a two-week business trip.  He stayed at home with someone taking care of him.  Upon my return, he was visibly shocked to see me and hurled himself straight at me.  Since then, he has decided he cannot stand being on the floor if I am on the couch; he wants to be on my lap or against my side or even on my chest.  Each return home after a trip has knocked down more of his reserve until now he gets so excited he cannot contain himself.  Of course, I can see in his expression that he wonders why he didn’t get to go along.

When I work on the weekends, Duffy comes with me.  He has a special place in my office that he alone owns.  For me, I have found the dog who loves squeak toys.  Actually, he is beyond obsessive about them.  I think this may be his one vice and I plan to consult with a behaviorist in the new year.

He has slimmed down and muscled up from long walks around the neighborhood and I let him choose the path each day.  We began obedience training in the fall and he did remarkably well.  I plan to continue with advanced training sometime in the spring.

He loves to chase squirrels and rabbits.  Squirrels baffle him because he hasn’t figured out he should look UP in the tree to see where they’ve gone.  He keeps racing around the base of the tree trying to find the little escape artist.

Honestly, this little pooch was the absolute best choice for me.  It was worth the 1200 miles I drove that weekend to get him.

BTW, we did march in the Scottish Walk parade in Alexandria, VA.  There were over 100 other Westies and all were rescues.  He wasn’t the least bit bothered by the bagpipes, drums or black powder muskets being fired.  I put a plaid scarf on him and he had a blast.