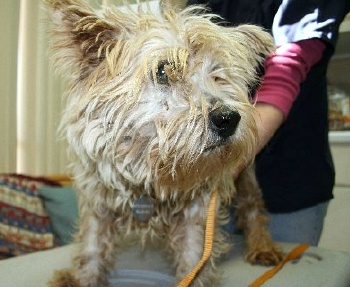 Izzy came to Westie Rescue of TN on a volunteer rescue transport in late January.   It was freezing cold and the wind was howling the night she was taken out of the cargo van and put into my car.  She was in a cage stacked ceiling-high in the cramped van.  It was so full because the rescue angel was trying to get as many dogs as she could out of their horrible living conditions.  She still had an all-night drive ahead of her to deliver the various breeds of little dogs that did not yet realize that their lives were about to change.  They were off to different rescues in several cities.

Izzy was in my car with six other dogs, including three other Westies.  They got as far back in the crates as they could.  They backed into the corners and trembled when we would reach in to touch them.  They didn’t understand what the warm blankets and soft towels in the crates were.  None of them cried none of them fussed, none of them dared to complain about the bitter cold during the time it took us to locate them in the cargo rescue van and transfer to my car.  It took a while because Izzy and the other Westies were almost unrecognizable as Westies.  There are no words to describe the filthy, disgusting shape they were in.  Even though the wind chill factor was in the teens, we drove the 225 miles back home with the back window vents on my SUV open.  The urine that permeated the inside of the car burned our eyes so strongly that we had no choice.  Windows down, heat blasting.  The little dogs had lived in their own urine for so long, it had become a part of them.  Each one of them had a blank look in their eyes that I will never forget.  I had to look hard to find Izzy’s little eyes.  They were covered by so much dirty, matted hair.

I would later learn that she suffered from severe dry eyes that had never been treated.  The worst-case the vet had ever seen.  Imagine your eyes hurting and burning and scratching for four or five long years and not being able to tell anyone.  Not that anyone, where she came from, would have cared.  Because of not being treated, she suffered eye damage and will now have a vision impairment that can never be healed.  She will need eye drops every day for the rest of her life to ease her discomfort.  She also had infections in both eyes.  Both of her dewclaws were so long that they had embedded into her skin.  I can only imagine how it must have hurt to walk.  She had infections and yeast on all of her feet and between her pads.  She had an infection in both ears.  Places on her skin were infected from pure filth more than likely.  She had hook and whipworms.  She had a urinary tract infection.  Her little mouth was in horrible shape.  She had severe dental disease and had to have teeth pulled.  A week after arriving at the vet, Izzy had to have surgery for bladder stones.  Izzy was so traumatized that I began to wonder if there was even a little Westie left in that tired and mistreated body.  If only there were some way to show the people that go to the pet shops what is left behind when the puppy truck pulls out to make deliveries.  All they see are the cute little clean puppies.  They never see the broken, tired and dirty little bodies that make those puppies possible because they are forced to.  They never look into the breeding dog’s face and see the pain and long-suffering.

Izzy stayed with the vet for two weeks.  She received all kinds of medicine for her many infections throughout her little body.  Imagine how wonderful it must have felt for her eyes not to itch and hurt.  Even though it was uncomfortable for a little bit, it soon felt better to walk without the sharp nails grown into her skin.  Her mouth began to heal and her appetite picked up.  She had her spay surgery and was on her way to better health.   Soon Izzy was off to her foster home.  When we arrived there, Izzy stood perfectly still in the driveway.  She didn’t dare move.  She did not understand the open space, the feeling of not being confined.  She was afraid of the unknown–freedom.   Her little foster host Westie ran around her to welcome her to their home.  Izzy just stared straight ahead and shook.  Her sweet foster Mom walked over and took her into her arms and welcomed Izzy into a safe world for the first time in her life.

Izzy continues to blossom and heal, both physically and mentally.  She patiently waits at her wonderful foster home for the family that will take her into their home and makes her theirs forever.

Thanks to WestieMed, our rescue did not go into the red after taking in these four sweet Westies.  We did not have to temporarily shut down our rescue while we paid off our over $3,000.00 debt and then try to start over.  Thanks to WestieMed, we are able to continue to move forward with our determination stronger than ever.  Bette Heidorn, WestieMed and all the wonderful people there are inspirations to us.  It is their heart’s desire to help heal every little Westie that they possibly can.  WestieMed makes a difference in countless little Westie lives every single day.  The dogs they affect move on through life bringing joy and companionship for many, many people.   If Westies could talk, I am sure they would sing the praises of this wonderful organization.   I know a little girl named Izzy that would be in the front row of that choir!