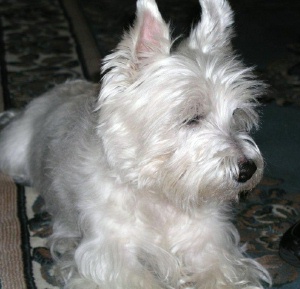 Although Jack, unfortunately, lost both of his owners within the past year the remaining family saw to it that he was well taken care of and boarded him at the Vet who had taken care of him since he was a puppy. The lady that owned Jack would take trips from the nursing home to the Vet’s office to visit him as often as possible as she obviously loved him very much. She did this for as long as she was capable of making the trips. When River City Westies learned of Jack, Teresa from River City Westies contacted us and asked if we would foster Jack which we did. We fell in love with him virtually instantly and a week or so later we adopted him. Jack is eleven years old and has a zest for life! He is a very happy, loving and active Westie boy who loves to play with toys, chase tennis balls, bark at squirrels, ride in the car, interact with others and go for long walks with us, but is equally content snuggling with you on the couch and giving you kisses! He gets along great with our other adopted Westie (June) who was a rescue dog from a puppy mill. They run around like two little white bullets and play together in our fenced yard. All in all two happy Westies!!

Jack has Exocrine Pancreatic Insufficiency (EPI) and requires a special diet and food supplement for the rest of his life. He has responded very well to this treatment, and the EPI is under control. We recently noticed that Jack seemed to be consuming a lot of water so we took him to the vet that had always taken care of him. They did a urinalysis and the results indicated his water consumption was too high for his size. The Doctor recommended that we have an ACTH test done to try and determine what the problem is. Thanks to WestieMed who is assisting us with the cost of the test we are getting it done ASAP. He is the love of our life and we want him to be healthy during his golden years. We can’t thank WestieMed enough for all they obviously have done to help Westies in need.

Thank You So Very Much,
Tom & Helene Wagner

Jack is doing very well. He just had his annual physical exam at Midlothian Animal care and everything seems to be OK.

We have Jack on a special diet that the Doctor recommended of Purina EN  with a measured scoop of Pancrea powder plus twice daily. He is pretty active for his age of 11 years and we love him very much. So we are enjoying every minute that we spend with him.

Thank you again for your help in the past. Enclosed is a picture we took of Jack in his Halloween costume when he participated in The River City Westie Walk last week.

Jack is doing good, he just had his twelveth birthday on March 4th. I had him in the vets a few days ago and he needs to have his teeth cleaned as he has tartar on them. The vet gave us some antibiotics to give him until we can afford to get his teeth cleaned which will be probably next month. Jack won’t let me brush his teeth as I have tried several times and so has the vet he gets vicious about it so we have to get his teeth cleaned annually, the last time they had to remove three teeth that were bad so we are hoping we don’t have a repeat of that again. Other than that he is doing great.