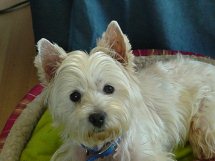 I was contacted by a Westie owner on Oct 5th.  She informed me that her dog groomer had a shampoo girl that worked at the salon and also worked as kennel help in a puppy mill half time for income.  The woman (Mary)  was homeless and lived in her car.

She told the salon owner that animal control came and issued a summons to the mill that they had to downsize from seventy dogs to thirty dogs in ten days or be closed down.   The woman started to dump her dogs.   Two of her Westies had given birth about six wks prior and she was going to dump the older breeding bitches who were about five years old.   She was going to dump them in the woods.   The mill breeder gave Mary the two dogs to dump in the woods, and Mary wound up taking them to the grooming salon asking for help.  They called me and I picked them up.  Both dogs were in bad shape, (Kimmie/Lesley) and the vet bills for both were $1131.67.   Both girls have the best personalities and are very social little butterflies.  Always happy and smiling.

Both had severe yeast infections and needed dental.  Kimmie was the worst, and she had a severe skin infection and required dental and extractions, spaying and an x-ray of her leg.  (Lesley was in much better shape).   Kimmie does not use her right back leg.  She currently hops around on three legs.  She has a severe luxated patella but I think its kind of not even able to go back in the socket at this point and we suspect a cruciate ligament.   The vet will not know more until she cuts inside

Kimmie had her surgery and it was unsuccessful.   She had such severe cartilage damage, and bone spurs, and other damage that it could not be repaired.  It was hard to see on an x-ray – but once the surgeon got inside, she said it’s comparable to If you knee broke and the tissue around it tore and you have your knee flexed and it healed that way for years to the point where now the bone density is so thick, you really can’t do much about it, its permanently affixed that way.  She can balance on it, but she is never going to use it.  The upside is that she isn’t in pain and we don’t have to amputate it.  My vet is going to find time to write a report up, but everything was fast and furious this weekend, and she didn’t get to that part.