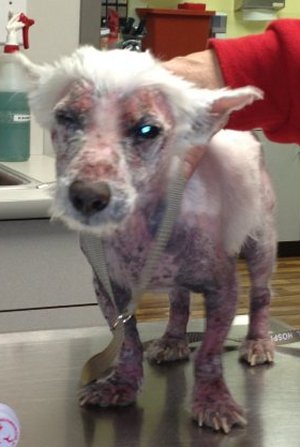 If not for a concerned human being, Jake might not have been with our rescue today.  The woman who contacted us cared enough about him to talk his owner into surrendering him to her.  She, in turn, took him to her vet for immediate care and then contacted us and took the steps to place him into our rescue program.  This kind soul shared that the owner did not care about this little guy and she warned us he was in bad shape but nothing could prepare any of us involved in rescue for what was in store when we saw him at Montrose Animal Hospital, our rescue vets.   He was two years old, weighed a minuscule ten pounds and the lesions on his body were indescribable.

Our veterinary clinic allows us to have rescues surrendered to them so Jake, as he is now known, was taken there.  He was in such bad shape that it was necessary to shave him, but it was so painful that he had to be lightly sedated to reduce the trauma to him.  Fur was trimmed away and it revealed inflamed and bleeding skin lesions.   After all, was said and done, Jake had severe demodectic mange and secondary infections.  He went into foster care with a litany of medications from ear drops, eye ointments, antibiotics to antifungals, and a de-wormer.  Needless to say, neuter surgery was the least of the worries at this point and the goal was to get him stronger and back to the Westie “attitude” we Westie owners all love and know.

Jake’s foster mom was amazing.  The amount of love and attention Jake received was over the top and went a long way in his healing process.  He has never been left alone at home – he travels to work with foster mom or dad every day dressed in his sweaters to keep him warm until his coat grows back.  Daily medicated baths have progressed to weekly baths to help his skin.  Walks have been slow in evolving because his paw pads were so inflamed that it took time to get him to where he could comfortably take leash walks.

We all thought this little guy was on the way to his new “forever” home because he was recovering from the mange – his fur coat was coming on strong and he was finally was able to be neutered.  Unfortunately, Jake’s journey to health was not over by a long shot.

Jake started limping toward the end of February, and examination by the vet showed a luxating patella.  The initial medical intervention included pain medication and crate rest but was ineffective, and surgery was required.  Surgery was performed on March 16, 2012, and Jake’s prognosis is great.  The vet indicated that all looks good and this should be the last of Jake’s issues.  He is now ready to find that “forever” family.

Jake’s story and the journey is confirmation for why the members of our club do what we do.  Westie Club of the South is an independent 501 (c)(3) club dedicated to helping our Westie companions.  Funding to rescue and treat needy Westies is raised through our efforts alone.  While we try to absorb the costs without assistance, Jake’s situation has been a challenge to us; hence, our request for assistance from WestieMed.

Right after Jake was adopted, his little boy had to have corrective surgery on both legs.  The photo of them in bed is right after the surgery.  The doctors had to actually break both legs and re-set them.  He spent two months in a wheelchair.

As you can see from the other photo, he is now sans casts, and the best part is that he and Jake can run together.

If you will recall, Jake had no fur when he came into our program, but look at him now!

We are all so thankful that WestieMed has such a generous heart.

Jake is doing great, not so fond of the cold rainy days but other than that he is fabulous. His skin looks terrific and he has grown so much fur. He limps some times but it doesn’t seem to bother him.

Jake is gorgeous, of course, but the photo with all his brothers and sister is just beautiful.  There isn’t much to tell.  Jake is the perfect Westie now that he is healthy.  My thanks to WestieMed for your part in helping Jake.