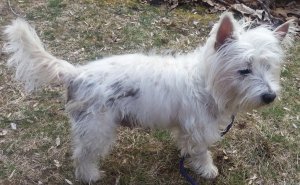 The day before Easter, a shelter in southern-most New Jersey notified me that they had a Westie and wanted me to take him. I said yes, of course, and I got Whitey on Easter Sunday. The shelter told me that another Westie Rescue group had declined to help Whitey before they called me, so I was his last chance.

Whitey had a retained diseased testicle which was the source of most of his troubles. That testicle was grossly enlarged and resulted in a lump the size of an orange hanging off his belly in the groin area. His skin was covered with deep dime-sized open, oozing sores all over his body, legs, tail, and head. This was a result of the hormones from the abnormal testicle, and a staph infection had also taken over his poor body and his skin. He also seemed to feel sick and was lethargic and not eating well, he had a Malassezia condition, and a great deal of flaking and dry matter was coming off his skin. In addition, his dry eye had not been treated and his eyes were infected, and his sight is almost entirely gone (it seems like perhaps he can see shadows out of one eye). He had an infected ear as well, and his teeth were in bad shape; many were so rotten they would break off when gently touched. My veterinarian performed emergency surgery the day after Easter, removing the diseased testicle and the rotten teeth; the vet cleaned his remaining teeth, not for cosmetic purposes, but in hopes that this could spare him a need for future dental work.

Whitey remains on antibiotics and anti-yeast medication. His prognosis is excellent: his skin and his spirit are healing well. He is a friendly boy who likes people and other dogs; he also likes to go for (short) walks and is not intimidated by the fact that he cannot see. He is also housebroken. I hope to find him a home with a loving owner who will continue his health care regimen and give him a good long life.

Whitey is doing well. He’s over his infections and he looks and feels better in all regards. He was adopted to a very loving home close to where I live so I get to see him sometimes.